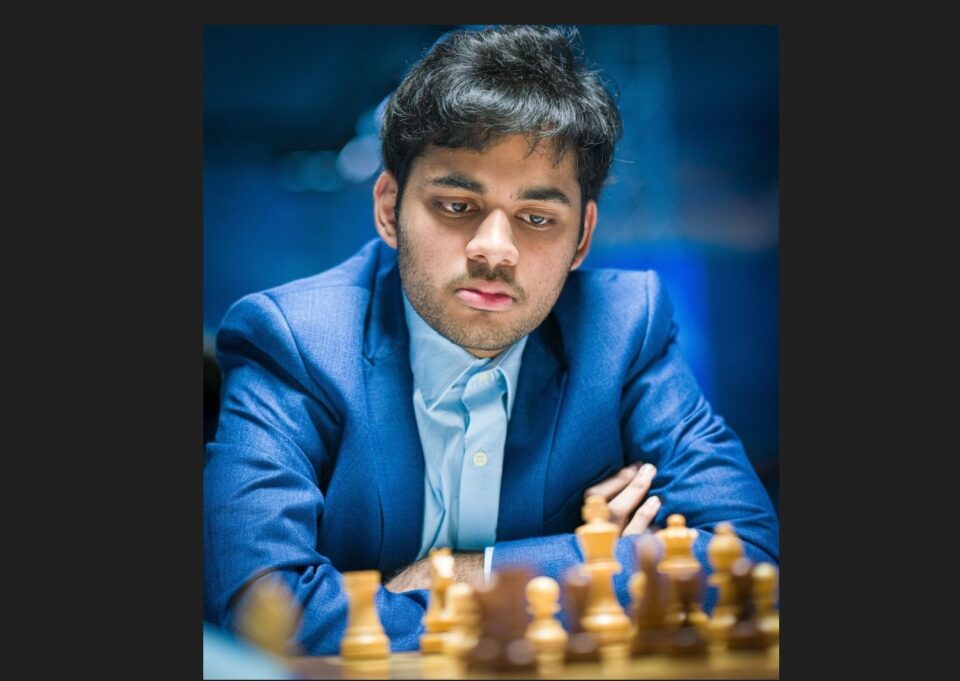 New York, Oct 16 (IANS) Indian young gun, 19-year-old Arjun Erigaisi inflicted a crushing defeat on world chess champion Magnus Carlsen in Round 7, leaving the Norwegian in a spot of bother in the USD 150,000 Aimchess Rapid — round five of the Meltwater Champions Chess Tour.

It was sweet revenge for Erigaisi who had lost to Carlsen in the Julius Baer Generation Cup final, and earned his first victory against the world No. 1 on Saturday.

The shock defeat happened in Round 7 with Erigaisi breaking through with the brilliant 27.Qf7+ counter-attack, bravely ignoring Carlsen’s apparent queen and rook threat down the b-file. The young Indian star went on to close out the win.

Contrary to the anti-climactic Julius Baer Generation Cup final where Erigaisi virtually collapsed against the world champion, the Indian stayed cool and calm on Saturday.

Erigaisi said afterward, “That (the win) felt really good, I was really happy with the game.”

Carlsen, playing from a log cabin in Are, Sweden, immediately bounced back to beat Erigaisi’s fellow Indian Vidit Gujrathi in Round 8 and end the day in joint-second on 16/24 with the exciting Azerbaijani Shakrhiyar Mamedyarov.

“I thought my performance yesterday (Friday) was maybe the worst I’d played on one day on the Tour… Today (Saturday) wasn’t great either, but it was a little bit better,” said Carlsen. On Friday Carlsen had a near-miss against Aditya Mittal and on Saturday he found himself in deep trouble again against Erigaisi.

Wonderkid Nodirbek Abdusattorov clung onto a narrow lead, as the Uzbek after dominating Day 1 on Friday, bounced back from a loss in the first game on Saturday to score two more wins and finish top of the leaderboard on 17/24 — one point ahead of the pack.

The first round of the day — Round 5 of the Meltwater Champions Chess Tour event’s prelim stage — was “savage”, according to IM Lawrence Trent in the commentary box, as all eight games ended with wins.

Vincent Keymer got off to a great start with a win against Mamedyarov. Azerbaijan’s No.1 overextended himself by placing his queen deep into Keymer’s position before the young German activated his own queen and went on the attack himself.

Mamedyarov then went on a run scoring three straight wins — including a quickfire 16-move win over Richard Rapport. Mamedyarov ended the day level with Carlsen and looking a shoe-in for the quarter-finals.

Abdusattorov, the world rapid champion and overnight leader, lost his first game of the day to India’s Vidit Gujrathi. With Carlsen winning, it allowed the champion to briefly draw level on the leaderboard.

In Round 6, Abdusattorov capitalised as another young Indian star Gukesh D threw away a winning position. As Carlsen lost to Erigaisi, Abdusattorov dispatched Pentala Harikrishna to retake the sole lead. A draw in the final round of the day against Anish Giri secured the lead for the second day running.

The event features 16 players in a round-robin prelim stage before the field is cut to eight and knockouts begin. The Aimchess Rapid is the last “Regular” tournament of the 2022 season with a prize pot of UD 150,000 before the end-of-season final event starts on November 14.