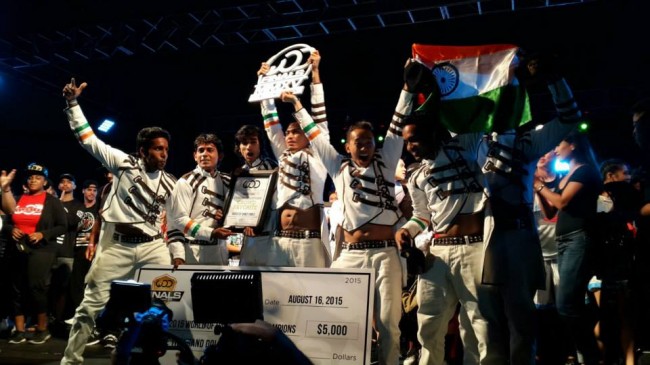 Indian classical dance moves on fast-paced western music became a hit here when the Desihoppers group of dancers from different parts of India took to the stage here.

Initiated by trio Shantanu Maheshwari, Macedon’D’mello and Nimit Kotian, the race to clinch the trophy was not easy for the Desihoppers.

Cries of “Bharat Mata Ki Jai” and “Ganpati Bappa Morya” rent the air and the Indian tricolour was waved at the venue, the Los Angeles Convention Center, as the group was announced the winners on Sunday evening. They received a trophy along with a cheque of $5,000.

They also got the ‘Crowd Favourite Trophy’ at the event – which since 2008, has united the dance community from the US, Europe, South America, Asia, and Canada – to celebrate the lifestyle and culture of urban dance and music.

“I still can’t believe that we won the first prize. There were so many tough competitors, who performed with about 50-70 people while we were just seven. We don’t know what we will do with the money,” Nimit told IANS after registering a win in the competition.

A dream to find acclaim in the dance sphere brought the trio together and as they moved a step ahead with the victory, Nimit said that “their hard work has paid off”.

“All our hard work… rehearsing for 12 hours, finding mistakes in our video again and again, and patiently working towards our goal, has paid off,” said Nimit, who hails from Mumbai.

Shantanu, who hails from Kolkata but is now based in Mumbai, dedicated the win to “the “citizens of India”.

India’s spirit of “unity in diversity” was very much in evidence as the Desihoppers – men in their early 20s — wore white outfits with tricolour handbands and gyrated to ‘desi’ beats at the finale of the global competition, which was judged by ace international dancers Matt Steffanina, Galen Hooks, Arnel Calvario, Jun Quemado and Beau Fournier.

The Desihoppers staged an energetic performance by starting off with a formation of Lord Ganesha and then providing a glimpse of Indian classical dance.

After the “Ganpati Bappa Morya” religious chant, the troupe switched to fusion mode with international hits like “I got the power”, “Turn down for what” and “Old McDonald had a farm”.

The group, which got mentored by Jaja Vanková, a choreographer from the Czech Republic, and of “So You Think You Can Dance” fame, not only got a standing ovation, but the audience was seen reaching out to the dancers after the performance to applaud their effort.

With an aim to inspire people with their journey, a reality TV show “bindass NAACH” will narrate ups and downs seen by the troupe. Vijay Subramaniam, vice president – Content and Communication, Media Networks – Disney India, said the win would open doors for other artists as well.

“This is not just another win, but an achievement that would open a window of opportunities for young India,” Subramaniam said in a statement.