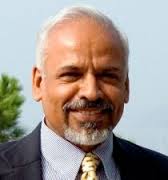 According to the Polytechnic Institute of NYU, the endowed chair named after Eugene Kleiner, a co-founder of Fairchild Semiconductor, the world’s first computer chip producer, was given to the India-born physicist by NYU Provost David McLaughlin.

Sreenivasan, who currently serves at the Polytechnic Institute of NYU as dean of engineering is known for his research on the behaviour of fluids and turbulence.

Commenting upon Dr. Sreenivasan, Provost McLaughlin said: “Dr. Sreenivasan is not only a leader in education, engineering, and technology. He is also an outstanding scholar, someone who exemplifies the scientific curiosity, innovative vision, and unwavering drive.”

The noted Indian physicist’s most recent scientific research is related to the science of fluids at very low temperature, thermal convection in laboratory and the internal structure of astronomical objects such as the Sun.

Sreenivasan, joined NYU in 2009 from the International Centre for Theoretical Physics in Trieste, Italy, where he served as a director.

Concurrently, he served on the faculty of the University of Maryland. Sreenivasan had also been affiliated with Yale University for more than two decades.