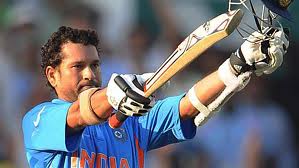 Taking note of Tendulkar’s iconic status in India, the influential daily carried two OpEd pieces on the day the maestro plays his 200th and last test in Mumbai saying the sense of loss after his retirement will “scarcely be any less in the rest of the cricketing world.”

In an OpEd titled “Where the Gods Live On … and On” Tunku Varadarajan, a research fellow at the Hoover Institution, noted “Tendulkar, whom everyone calls Sachin, is the most revered cricketer in India.”

“In fact, it would be entirely accurate to describe him as the most revered contemporary Indian, or even, with only a pinch of hyperbole, the most revered Indian since Mahatma Gandhi held the nation in thrall.”

“Suspend your disbelief and think of him as a cross between Babe Ruth and Martin Luther King,” Varadarajan wrote comparing Tendulkar to two American icons – one in the sports arena and other on the political field.

Ruth was a Major League Baseball pitcher, nicknamed “the Sultan of Swat” who played for 22 seasons on three teams, from 1914 through 1935 and King was leader of African-American civil rights movement inspired by Mahatma Gandhi.

“In a land of chronic inefficiency, he was remorselessly efficient; in a land with a global inferiority complex, he was the best in the world; in a land where public figures are strutting peacocks, he was often a picture of painful humility; in a land that thirsts for self-respect, Sachin spelled
pride,” he wrote.

However, in Varadarajan’s view “there has been an unlovely whiff of selfishness in his reluctance to give way to younger players, in his limpetlike clinging to his place, and in his relentless pursuit of milestones.”

“But we shouldn’t blame Sachin,” he added noting, “In any other land, he would have aged, recognized the limitations brought on by age … and moved on. India has not let him do so. It is India, by its corrosive love, that has betrayed Sachin Tendulkar.”

In a separate piece titled “Tendulkar Stepping Away From Cricket, but His Impact Remains” Huw Richards wrote “Sachin Tendulkar’s ability to generate mind-numbing numbers has survived to the very end of his prodigious career.”

Much of Sachin’s greatness comes from the fact he consistently fulfilled the expectations he carries in India and among the Indian diaspora, he wrote noting, “Few players have left so comprehensive or so potentially enduring a mark in the record books.”

“If there is a doubt where he ranks historically, consider that Tendulkar was the only active player named by Wisden Cricketers’ Almanack to its all-time team last month. The sport’s leading chronicle had 150 years of cricket to choose from,” Richards wrote.

“Records can be broken. South Africa’s Jacques Kallis or England’s Alastair Cook might overtake his test numbers, but Tendulkar’s impact will remain,” he wrote.

“And if the sense of loss is most intense in India this coming week, it will scarcely be any less in the rest of the cricketing world,” Richards added.

Doctor sentenced for sexually abusing women at his pain clinic