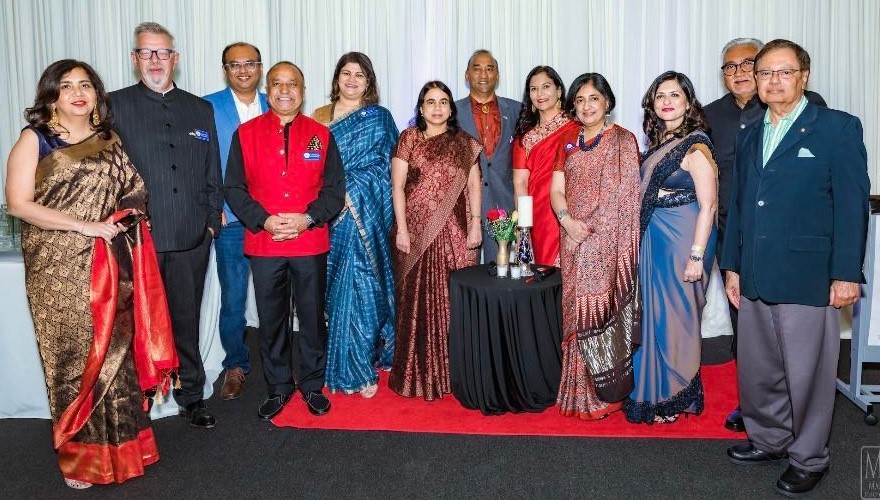 The event kicked off with a red-carpet reception to celebrate the wonderful world of Indian cinema and its potential growth in Georgia, followed by an opening night film. The night also featured Keynote address by Rahim Charania, Founder, MD, Woodvale in a tête-à-tête format.  The diligently curated festival showcased a myriad of movies including four short films and three full length movies that ranged in durations of 127 to 12.5 minutes with filmmakers ranging from seasoned alternate cinema directors to first time novice directors, with two Atlanta based directors!

While Los Angeles remains the epicenter of filmmaking, it is no secret that Georgia is indeed the Hollywood of the South. Home to over 150,000 people of Indian origin and over 500 companies, including Indian-owned and operated businesses in the Atlanta region, the film festival was a triumphant attempt to showcase popular Indian cinema to Atlantans, as well as introduce visiting Indian directors, actors and producers to potential movie production opportunities in Atlanta and the state of Georgia.

Recognizing Georgia’s booming film and production industry, coupled with the growing Indian diaspora, the GIACC launched the inaugural AIFF in 2018. “It is heartening to see how far GIACC has come in organizing AIFF since 2018. This year we had an excellent slate of movies, including local Atlanta productions, greatly appreciated by a very engaged and interested audience. GIACC’s message of “make films in Georgia” resonated with our visiting Directors, who are keen to make Georgia their movie production destination in the future! Anita Ninan, GIACC Board member, Immediate Past Chairperson and President, observed.

“Audiences are in theatres. Box office is buzzing with the shadow of the pandemic getting shorter. I am so happy that Georgia is emerging as a huge film and TV production center,” Dr. Swati Kulkarni, Consul General of India, Atlanta, who headlined the festival, noted.

Keynote Speaker Charania shared an interesting perspective on the intrinsic relation between trade, commerce and Indian storytelling. “When it comes to trade and commerce, if we go back to the written history of what has been traded and primary source of commerce, it is the exchange of ideas. We are a culture and community of human beings that live on the bags of stories  – whether these stories come from the religious text that we all follow in one way or another, or it comes from news or stories from our parents.. The Indian culture has, throughout history, led the world in that storytelling. That storytelling is in our genes. So, when you talk about Indians coming to America to tell stories, let me tell you, we are here already. Our children are those storytellers,” Charania noted. Observing that immigrants in the 50s were forced to survive, Charania said next generations understood better ways of promoting themselves in the mainstream, be it as main leads in major motion pictures, television shows or standup comedy. “Our cultural story is starting to awaken,” he remarked.

“GIACC’s mission with AIFF is to promote GA film industry to Indian film makers. Director of our closing night movie, Lost, Aniruddha Roy Chowdhury, and producer Neeraj Joshi, Marketing Head, Zee Studios, were so impressed with the warm reception from AIFF audience that they expressed interest in making their next movie right here in the Peach State. On Sunday (09/25), the CEO of a studio based in Covington GA, personally gave a tour of his facilities to the film makers who participated in the festival, the advantages of producing a movie in GA, including subsidies, tax credits and access to talent and equipment needed for shooting,”  SK Raj, Chairman & Member of the Board, said.

The festival opened with Shiv Shastri Balboa, directed by Ajayan Venugopalan featuring the supremely talented Anupam Kher and Neena Gupta, narrating the story of a retiree from India, and a big Rocky movie fan who moves to USA and ends up on an unexpected road trip through the American heartland with an underlying message that it’s never too old to reinvent yourself…

“It’s never too late to Re-Tire, after you retire,” Venugopalan said in his exclusive with NRI Pulse. Drawing inspiration from watching his own parent’s move from India to the US and the cultural challenges they faced, Venugopalan said was the origins of his idea for the movie. He added that both seasoned actors had always been his first choice and he was lucky that they were available post pandemic.

“The Umbra refers to the darkest shadow of the eclipse in Spanish,” Atlanta resident Karthik and the movie’s director told NRI Pulse. Predominantly shot in Atlanta, the title, he said, ties into the dark past of a promising young man who aspires to be an actor.

Was Karthik able to avail the tax benefits the state offers to filmmakers? “No. The 30% incentive that the state offers is really good – but it applies only to big production houses and not independent filmmakers like me,” he said, adding that extending that offer to independent filmmakers might attract more Indian moviemakers to Georgia. “We have everything in Georgia from technology to talent,” he said highlighting the state’s potential. What was the inspiration for Umbra? “I didn’t make this movie to gain anything out of it. I wanted to do something crazy and have it remembered for some time. It was my passion and love towards filmmaking. I wrote, designed, produced and directed and acted in too. “An IT professional by day, Karthik put all his heart to pursue his passion through online courses. The passionate debut director said that he already had his next script ready and his looking to associate the movie with larger production house to appeal to larger audiences.

Gray, directed by Sakshi Gurnani, featuring Shreya Dhanwanthary, Diya Mirza, and Chatanya Sharma explores the nuances of ‘consent’ between friends unfolding the tale of Naina whose best friend violates the boundaries of her consent. With the help of her therapist, Dr Noorani (Dia Mirza), Naina takes a journey between past and present, to learn how to deal with her feelings and her trauma, and clearly define for herself the meaning of ‘consent’.

With the central theme of appearances being deceiving, Bad Egg, Directed by Mehak Jamal, featuring Sheeba Chaddha, Zoya Hussain, Akshay Oberoi, Jim Sarbh begins with Zoya receiving a disturbing call from her mother – her sister Zara has gone missing during the pandemic. Surprisingly, Zoya isn’t rattled enough. She’s hiding something, all of which leads back to the fateful night of a party. Throughout the film, Zoya interacts with her surroundings as if she’s re-calibrating to them. As the plot unravels, so does she.

In The Salon, directed by Nitya Misra featuring Sudha Belawadi, B. Suresha, and Eric Leivang, Nimmi, a middle-aged woman strikes up a conversation with her hairstylist, and works through a loss while getting her haircut. Through the course of a haircut, this short film explores both the conversations we have with others and with ourselves.

Closing Night Presentation Lost, directed by Aniruddha Roy Chowdhury (of Pink Fame) featuring Yami Gautam, Pankaj Kapoor Rahul Khanna presented an emotional social thriller that represents a higher quest, a search for lost values of empathy and integrity. Inspired by true events, Lost is a story of a bright young woman crime reporter in her relentless search for truth behind the sudden disappearance of a young theatre activist.

With a sold out reception and well attended movie premiers, the event organizers had much to celebrate.

“Thank you to all Atlanta audience who came and watched the movies! GIACC is proud to be a platform for the festival and will continuously work to bring more of India to GA thru these movies  and the business of filming itself,“ Grace Multani, President, GIACC, said.

“We at GIACC are grateful to our sponsors and partners who are vested in our cause and share a common vision. Looking forward to Atlanta Indian film Festival 2023!,” Vaishali Joshi, Sponsorship Director, GIACC said.

That the festival has imparted tangible results, has been an added bonus as Suneeta Mishra, Artistic Director, AIFF 2022, noted. “As the Artistic Director of AIFF since its inception in 2018, I can say with confidence that this year’s line up was one of our very best. Some of the movies were sweet, some edgy, some poignant,  and some made us think, long after the movie was over. Most of our directors were screening their debut movies and I feel proud that AIFF was able to provide a platform to them for reaching a wider audience and also connect creative minds through the festival.  We had very engaging post screening discussions and  the audience got a chance to interact with the directors and actors. For the first time we had two movies created by Atlanta-based Indian film makers, one of whom actually mentioned that our 2019 festival that he attended inspired him to take the plunge and make a movie. What more can be more gratifying for us than that !”

“This festival is GIACC’s labor of love for the business of the arts and for the Indian diaspora in Atlanta,” Dr. Pamila Dembla, Festival Director, AIFF 2022 said. And it showed.

This year, over 240 large-production films and TV shows, including The Divergent Series: Allegiant Part I and The Walking Dead, are filming in Atlanta. The entertainment industry is benefiting from tax incentives which encourage movie production in the state. Atlanta is more affordable than Los Angeles. Apart from the financial aspects, Atlanta offers inherent travels benefits with plenty of direct flights, an abundance of rental studios, great local workforce, and motley of shooting locations. With enthusiastic efforts from GIACC and encouragement from movie aficionados, the day we declare Georgia the Switzerland of Bollywood won’t be distant dream.