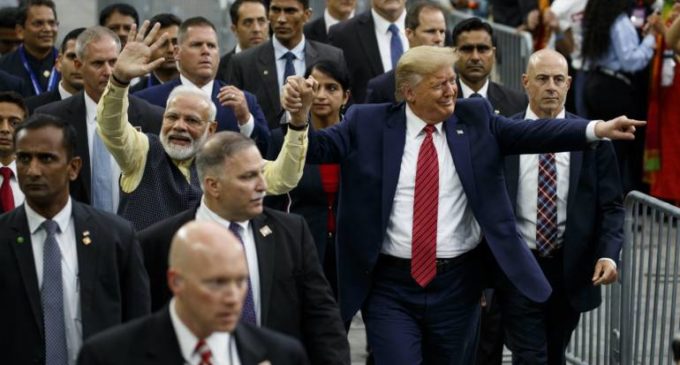 New Delhi/Washington, Feb 12 (IANS) US President Donald Trump will get a red carpet welcome in Gujarat later this month — on a grander scale than the event organized for Prime Minister Narendra Modi in Houston last year.

In a tweet, Prime Minister Modi hinted at the ongoing preparations for President Trump’s two-day visit on February 24. “Extremely delighted that POTUS Donald Trump and First Lady will visit India on 24th and 25th February. India will accord a memorable welcome to our esteemed guests. This visit is a very special one and it will go a long way in further cementing India-US friendship,” Modi tweeted.

Recalling that “India and USA share a common commitment to democracy and pluralism”, Prime Minister said, “Our nations are cooperating extensively on a wide range of issues. Robust friendship between our nations augurs well not only for our citizens but also for the entire world.”

Trump at a press conference in Washington DC on Tuesday revealed that Modi has organized a grand welcome for him in Ahmedabad. “He (PM Modi) said we will have millions and millions of people. My only problem is that last night we probably had 40 or 50,000 people… I’m not going to feel so good… There will be five to seven million people just from the airport to the new stadium (in Ahmedabad),” he quipped.

Among world leaders, Trump and Modi, share a very good rapport with each other.

Sources said Trump and Modi will do a roadshow from the Ahmedabad airport and visit Sabarmati Ashram to pay tribute to Mahatma Gandhi. Later, President Trump will inaugurate Ahmedabad’s newly-constructed Sardar Patel Stadium with a seating capacity of over 100,000 people. The welcome ‘Kem Chho, Trump’ to the US President will be accorded at stadium.

President Trump is likely to sign a limited trade deal with Prime Minister Modi, ahead of the US Presidential elections later this year. He hopes to draw votes from the Indian diaspora in the US along with his core constituency to which he promised in the last elections that he will secure better terms for trade from America’s key trading partners.