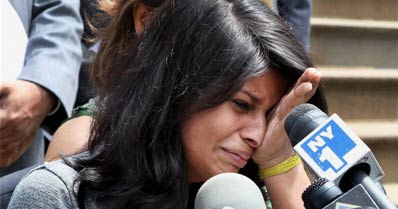 Atlanta, GA: Krittika Biswas, daughter of Indian diplomat Debashish Biswas, who was vice counsel at the Consulate General of India in New York has won a $225,000 settlement from New York City over her wrongful 2011 arrest on cyberbullying charges, according to media reports.

Manhattanfederal Judge John Koetl praised Krittika Biswas for being an honor student while at John Bowne High School in Queens.

Krittika was suspended, arrested and spent a day in jail during her senior year in February 2011, after being accused of sending obscene and threatening e-mails to her teachers. Her charges were dropped after a male classmate was identified as the real culprit, reports New York Post.

She had sought $1.5 million in her 2012 suit against the city and school officials. Krittika who is now 21, initially demanded a key to the city after being arrested but did not include the request in her suit.

“An investigation after her arrest had found that another student had sent the emails but that student was not arrested or criminally charged which is proof of foul discriminatory disparate treatment of Biswas despite her actual innocence,” said Batra.

Krittika who had plans of pursuing her college education in the US, moved back to India after her ordeal.

Batra said he advised Krittika and her family that a “just resolution” of the case would be an appropriate move to “enhance the bilateral relationship” between India and the US, especially now, before the visit of India’s PM Narendra Modi’s visit to the US.

SECRETS TO BEING TRULY HAPPY