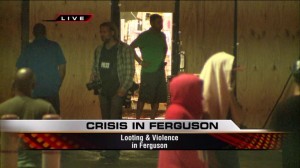 Washington, Aug 22 (IANS) Even as a semblance of order was restored in a small city in Missouri after nearly two weeks of unrest, Indian and other Asian-American-owned businesses were reported to be in a mess after days of looting.

The Daily Beast cited the lawyer of an Indian-American store owner as saying the authorities let the looting happen as protests engulfed the predominantly black St. Louis suburb of Ferguson in the wake of the police shooting of Michael Brown, an unarmed, 18-year-old black man.

The Ferguson Market, where Brown allegedly grabbed a handful of cigars before his deadly encounter with police, looters have twice targeted the store owned by the Patels, an Indian-American family, the Beast reported. Several other stores owned by Asian-Americans have also been looted. These include Northland Chop Suey, a Chinese restaurant, a second market, a beauty shop, and a cell phone store, it said.

Jay Kanzler, the Patels’ lawyer, told The Daily Beast he believed that law enforcement authorities allowed the looting of Ferguson Market on Friday in part because it is a minority-owned small business. However, local Asian-American business owners cited by the Beast said they don’t think looters targeted them because of their race.

Even as the protests continue, many of the owners are already back in their stores, rebuilding and serving Ferguson residents, it said.

“We love Ferguson and are proud to be business members of this community.”

“It is so sad and disheartening to see this level of violence expressed toward the business owners, who have always supported this community in good times and bad,” Anil Gopal, president of the St. Louis Indian Business Association, was quoted as saying.

“Many minority businesses located here and helped revitalise this community. We hope and pray that the violent actions of a few outsiders do not erode any progress Ferguson and its people have been experiencing.”

Meanwhile, Governor Jay Nixon ordered the Missouri National Guard to begin a withdrawal from Ferguson signalling that the authorities believed they had largely restored order after nearly two weeks of unrest, the New York Times reported.

The move came after two nights of calm marked by none of the clashes between the police and protesters that had been a regular occurrence since the Aug 9 shooting of Brown, it said.

Attorney General Eric Holder, who met with the family of Brown during his trip to Ferguson, was quoted by the Times as saying that mistrust exists between the police and the people they are meant to serve.

The latest New York Times/CBS News poll, meanwhile, revealed a racial divide in how Americans view the reactions of President Barack Obama and the Missouri governor to the unrest in Ferguson.

While some prominent African-Americans have criticised Obama for what they said were dispassionate remarks and a lack of leadership after the shooting of Brown, the poll indicates that most black Americans continue to strongly support the president.

Sixty percent of the black participants surveyed said they were satisfied with Obama’s response to the situation, and 20 percent said they were dissatisfied.

In contrast, whites were closely split in their assessment of Obama’s reaction, with 35 percent positive and 39 percent displeased, the Times said.