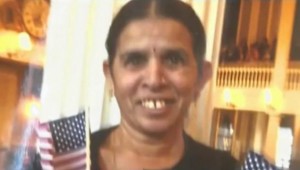 Washington, Nov 21 (IANS) Just days after becoming an American citizen, a woman from India was killed in front of her husband after being struck and dragged by a pickup truck for around five kilometres.

Kanchanben Patel, 58, was struck outside the Arbor Inn Motel in Wrentham, Massachusetts, where she worked Monday night. Her husband, Dahyabhai Patel, was able to free himself from the vehicle and suffered minor injuries.

Moses Acloque, 22, the man accused of driving the truck that killed Patel, has been arrested and pleaded not guilty, according to Boston Herald.

Wrentham District Court Judge Emogene Johnson Tuesday set $3,000 cash bail for him. Acloque must also wear a GPS tracking bracelet until he returns to the court for a hearing Dec 19.

Police said Acloque and another man who was taken into custody had a dispute with the motel’s management over their bill and that the victims, who were not part of the argument, were simply in the wrong place at the wrong time.

Investigators say that Acloque dragged Patel’s body under his truck for 3.2 miles (5.14 km), while another driver who witnessed the incident was following him. The driver behind Acloque drove erratically while tailing him, in order to attract the attention of police. His plan worked, and police pulled over both the vehicles.

The state trooper, Sean O’Brien, thought he noticed a deer carcass underneath Acloque’s truck, but realised it was a human body once he got a closer look.

Acloque, who claimed that he didn’t remember hitting anyone, was arrested, and Patel was pronounced dead at the scene.

Patel had been waiting for years to become an American citizen, something her friends and co-workers say she was very proud of. They even gave Patel a cake the day she became a citizen, one of them told CBS Boston.