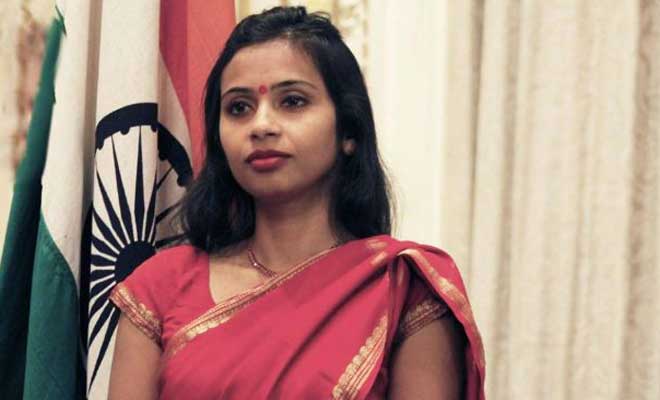 Washington, Dec 14 (IANS) A brewing India-US diplomatic row over the arrest of a senior Indian diplomat in New York for alleged visa fraud threatens to frost strategic partnership considered crucial for America’s Asia pivot.
While an angry India has asked the US to quickly resolve the matter of the “absolutely unacceptable” treatment of Devyani Khobragade, its deputy consul general in New York, Washington hopes the issue would not affect their long standing partnership.
India’s chargé d’affaires in Washington, Taranjit Singh Sandhu ,Friday raised the issue with the State Department to reiterate Indian Foreign Secretary Sujatha Singh’s “strong demarche” to the US ambassador in New Delhi, Nancy Powell, on the issue.
Khobragade, 39, was arrested, handcuffed and charged Thursday with one count of visa fraud and one count of making false statements, which carry a total maximum sentence 15 years in prison.
She was later released on a $250,000 bond after pleading not guilty in a Manhattan court. She is due back in court in January.
Sandhu, an embassy statement said, emphasized that Khobragade “is a diplomat, who is in the US in pursuance of her duties and hence is entitled to the courtesy due to a diplomat in the country of her work.”
But US officials are believed to have taken the position that under the Vienna Convention on consular relations, consular officials enjoy immunity from the jurisdiction of US courts only with respect to acts performed in the exercise of consular functions.
New York-based Indian-American attorney Anand Ahuja agrees that that unlike diplomats accredited to the federal government, consular officers are not accorded absolute immunity from a host country’s criminal jurisdiction.
They may be tried for certain local laws by a local court, and are immune from local jurisdiction only in cases directly relating to consular functions, he told local media.
Another New York attorney Ravi Batra, who has handled such cases before, suggested creation of a new legal category for diplomatic foreign domestic workers exempting them from US labour laws, including, wages and hours.
Until then “American laws must be followed to avoid both criminal and civil liability as well as diaspora and foreign-sovereign embarrassment,” he said.
Diplomatic corps of foreign nations who pay their workers below US-mandated hours and wage standards “remain at high risk to be in the crosshairs of illegality and reputation-suicide,” Batra said.
US media on its part has focused on the issue of exploitation of the housekeeper with the New York Daily News saying “Women’s advocate, Indian diplomat paid housekeeper peanuts” and the New York Post screaming “Women’s rights lobbyist ‘pays nanny $3 a hour'”.
Both dug up an April speech by Khobragade where she “provided a unique perspective on gender and social equality in India” and “spoke passionately about women’s rights.”
Ironically the embarrassing incident took place just a day after Sujatha Singh returned home after an “exceedingly useful and very productive” visit during which Washington signalled its desire to intensify the India-US partnership regardless of the upcoming 2014 parliamentary elections in India.
Singh had held talks with top Obama administration officials across the board starting with Secretary of State John Kerry to White House Deputy National Security to Advisor Tony Blinken to senior officials in the Defence and energy department.

Sussanne is, will always be love of my life: Hrithik