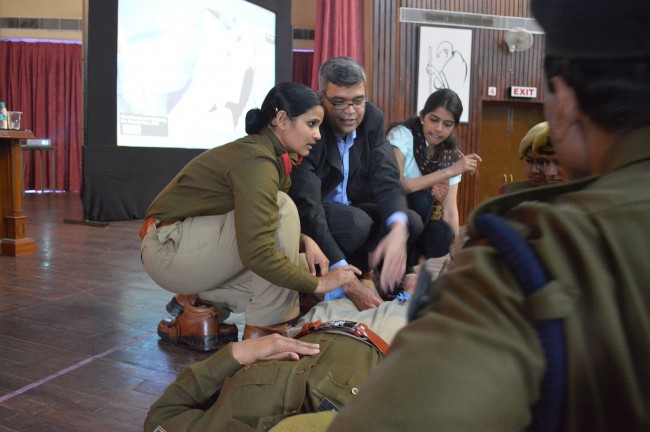 Washington, Dec 20 (IANS) An Indian-American surgeon is hoping to raise $25 million to train 1.5 million first responders – the first rescuers to arrive at an accident scene – in five years to prevent over 1,000 deaths on Indian roads every day that cost the nation $50 billion annually.

Rajasthan University-educated surgeon Dr. Dinesh Vyas, an assistant professor in the Department of Surgery at Michigan State University since 2011, has already trained over 4,000 first responders in India using a $200,000 simulator dummy.

He is now leading a strong international multi-disciplinary team to India from December 26 to January 4, 2016 to win support for the programme from Indian auto, IT and healthcare industries by way of corporate social responsibility (CSR).

“This programme will generate $5 billion business for auto, IT and healthcare industries and will save a lot of lives,” Vyas told IANS in an interview.

“Trauma and roadside epidemic is one of the biggest health concerns for India,” he said. “Unfortunately, it has been neglected for a long time and with a three percent annual increase in deaths, we have more than 1,000 deaths everyday and 5,000 severe disabilities.”

Over the last eight years, Vyas’ team has established five centres in Rajasthan which have trained 2,000 first responders in person and another 2,000 through an online course with the help of 200 trainers under its umbrella. Training 1.5 million first responders at 50 centres in the next five years would stall a three percent increase in mortality, he said. “Our next five-year goal will be to reduce the mortality to one percent annually, at par with any developed nation.”

The idea behind taking an international delegation to India, Vyas said, was “to address the trauma problem holistically”.

“We are concentrating systematically on all the aspects of trauma, to prevent a burden on the health system,” with a focus on pre-hospital cae while simultaneously building a platform on prevention.

The aim is to develop and build a contextual training programme in multiple aspects of trauma in various Indian languages starting with Hindi, Bengali and Telugu.

The international delegation comes with major strengths in fields ranging from surgery and trauma and critical care to mass media and communication to health legal issues and highway engineering.

The delegation includes faculty from US and Britain, with several endowed professors from Pittsburgh, Michigan State and other major universities.

Dr. McSwain from Tulane University, one of Vyas’ collaborators, developed in 1980 a four-tier system in the US that goes from online education to highly sophisticated trauma programmes for surgeons.

“The technology we are using is not available even in most of the centres in the US at this time,” Vyas said. “We are designing a programme that will eventually help even developed nations in building a cost efficient programme.”

To raise money for the programme, Vyas and his team are making presentations to various foundations and IT companies both in the US and India.

During his visit to India, Vyas would be visiting Jodhpur, Jaipur, Hyderabad, Manipal, Bangalore, Karimnagar and New Delhi.

He would be addressing, among others, the National Police Academy in Hyderabad and the Rajasthan Police Academy and meet officials and fellow professionals to gain support for his mission.

Seven charged with stealing the identities of Indian-Americans