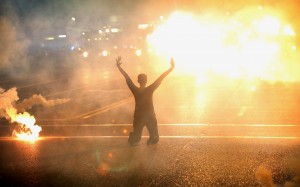 Washington, Nov 25 (IANS) Indian-American owned and other businesses in Ferguson, Missouri, Tuesday braced as the town erupted into violence after a grand jury declined to indict a white police officer in the fatal August shooting of an unarmed black teenager.

More than a dozen buildings, including locally-owned businesses, were set on fire and windows smashed in small town of 22,000, nearly 70 percent of them black, but all but four of its 53 strong police force white, after Monday night’s verdict.

Missouri city looked like a war zone with an entire row of businesses on West Florissant Avenue, a major thoroughfare, were engulfed in flames, CNN reported. Police cars and a row of vehicles at a nearby dealership were turned into fireballs.

Police in Ferguson made at least 61 arrests on charges ranging from unlawful assembly to burglary to unlawful possession of a firearm to arson, it said.

Protests were also held across the US, including in Los Angeles, New York and Washington, after the grand jury failed to indict police officer Darren Wilson in the death of Michael Brown after an incident in the St. Louis suburb Aug 9.

They led marches, waved signs and shouted chants of “Hands up, don’t shoot,” the refrain that has become a rallying cry in protests over police killings across the country, according to CBS News.

Shortly after Monday night’s verdict, speaking from the White House, President Barack Obama joined Michael Brown’s parents in calling on anyone who protests to do so peacefully. Community leaders have also asked for calm.

But many activists have promised more waves of protests nationwide Tuesday as the racially charged case in Ferguson inflamed tensions over what Obama called broader challenges of “the mistrust between law enforcement and communities of colour”.

The president said he had instructed Attorney General Eric Holder to work with cities across the country to build better relationships between communities and law enforcement.

Police departments in several major cities were getting ready for large demonstrations with the potential for the kind of violence that marred nightly protests in Ferguson after Brown’s killing.