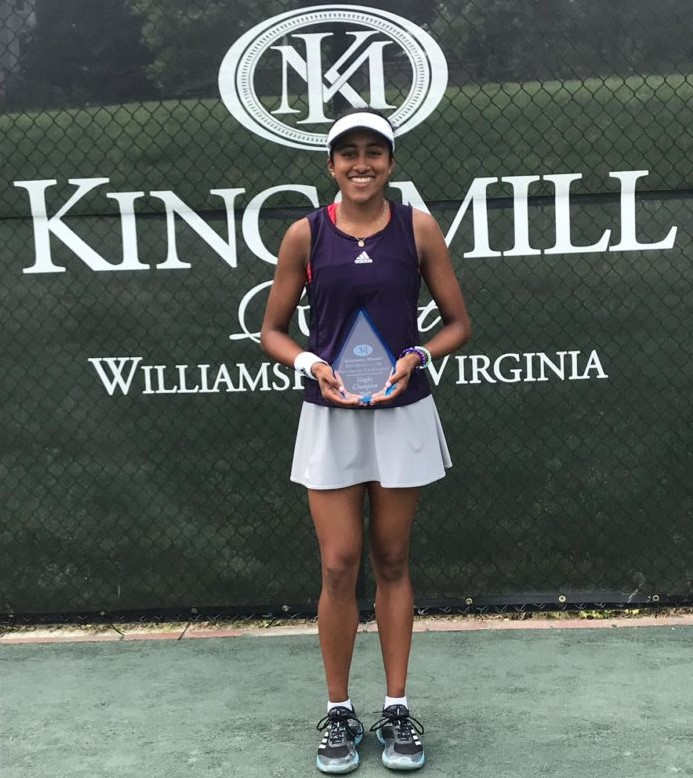 Natasha, seeded third, sustained her terrific run in the tournament with straight sets 6-2, 6-3 win over Nina Stadler, 23, from Switzerland, the No. 6 seed.

The talented tennis player has two pro doubles titles to her credit too: the United States Tennis Association’s Pro Circuit $15,000 Tampa tournament, in Florida, last year; and in Carson, California, in March of this year.

Natasha, who is from Fairfax, Virginia, lifted the doubles trophy in Florida with Caty McNally, and partnered with Rasheeda McAdoo, in the tournament in California.

In the tournament at Williamsburg, Subhash played almost flawless tennis, losing only one set on her way to the singles title, against Stadler.

She was back to her rollicking self in the semi-finals, bageling Elaine Chervinsky from the US, 6-0, 6-0, before she gave a sterling performance in the title match.

Natasha’s ITF world tennis singles ranking as of today, is #185. Her WTA ranking for singles is #788.

She has played all four of the Grand Slam tournaments, in the junior girls category, and has been steadily rising in the rankings on the pro circuit in a short period of time.

Last month, at the Boar’s Head Resort Women’s Open, Natasha came close to beating Louisa Chirico from the US, who has been ranked as high as 58th in the world and has played in the women’s singles main draw of every Grand Slam, losing 6-3, 6-7, 3-6, after having match points.

The confidence the Fairfax teen gained from that match seemed to have served her well in the tournament at Williamsburg.

Natasha trains at 4 Star Tennis Academy, under coach Bear Schofield. She has committed to the University of Virginia

Natasha is the daughter of Subhash Kongassery and Sulekha Subhash, who emigrated to the United States in 1997, from Delhi. The couple, who are from Kerala, grew up in Delhi. Sulekha is a teacher, while Subhash Kongassery is an IT professional in the Washington, DC area.

HAVE YOU SUBSCRIBED TO OUR VIDEO NEWS BULLETIN YET?