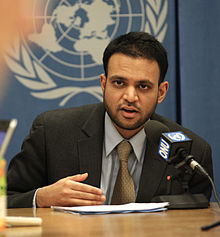 Washington, Feb 19 (IANS) Rashad Hussain, of Indian heritage, has been appointed as US envoy and coordinator for Strategic Counter-Terrorism Communications to expand international engagement and partnerships to counter violent extremism.

Announcing his appointment Wednesday, the State Department said Hussain will lead a staff drawn from a number of US departments and agencies for this purpose and develop strategic counter terrorism communications around the world.

Hussain, 36, the son of Indian-born US citizens, was earlier US special envoy to the Organisation of Islamic Cooperation (OIC), the second largest intergovernmental body after the UN, with 57 member states.

As part of his new role, Hussain will also serve as coordinator of the Centre for Strategic Counterterrorism Communications, established in 2010 to coordinate, orient, and inform government-wide strategic communications focused on violent extremists and terrorist organizations.

Hussain was born in Wyoming and was raised in Plano, Texas. His father, Mohammad Hussain, was a mining engineer and his mother Ruqaiya is a doctor, according to Wikipedia.

A lawyer by training, he was previously deputy associate counsel to President Barack Obama, focusing on national security, new media, and science and technology issues, the State Department said.

He has also served as director for Global Engagement at the National Security Council and as a Special Assistant United States Attorney in Washington, DC, where he prosecuted criminal cases.

In 2009, Hussain worked with the National Security Council in developing and pursuing the New Beginning that President Obama outlined in his address in Cairo.

Before joining the White House, he was a member of the legal staff for Obama’s Presidential Transition Team.

Hussain previously served as a trial attorney at the US Department of Justice.

Earlier in his career, he was a legislative assistant on the House Judiciary Committee, where he focused on national security-related issues.

Hussain received his JD from Yale Law School, where he served as an editor of the Yale Law Journal.

He also earned his Master’s degrees in Public Administration (Kennedy School of Government) and Arabic and Islamic Studies from Harvard University.

In January 2013, Hussain received the Distinguished Honour Award which is given for “exceptionally outstanding service to the agencies of the US Government resulting in achievements of marked national or international significance”.