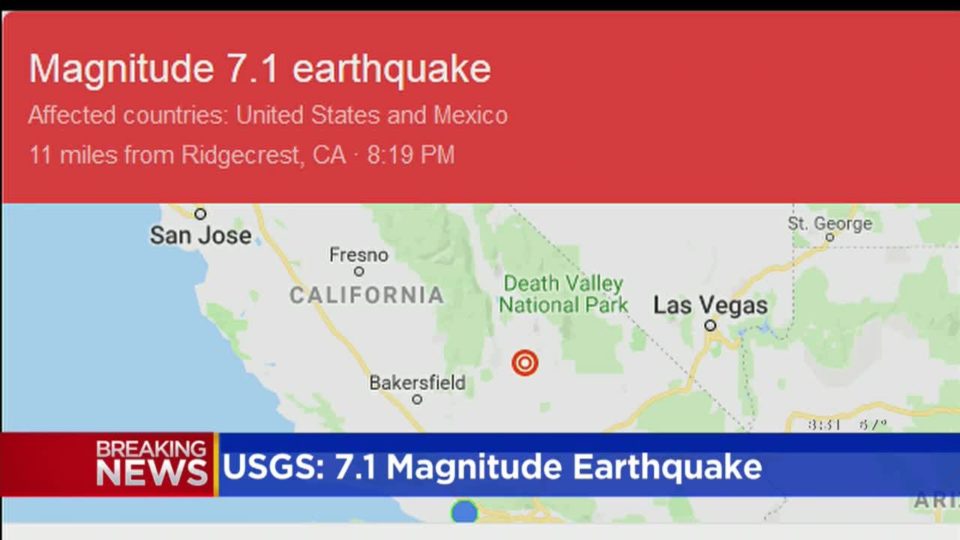 Los Angeles, July 7 (IANS & Staff) As officials continue to assess the damages caused by a magnitude 7.1 earthquake that rocked Southern California, an Indian-American owner of a Super 8 motel in Ridgecrest city told CNN she thought the roof would collapse on her and her guests. She feared they would not survive the quake.

The powerful quake struck at around 8.20 p.m. on Friday night and was centred near Ridgecrest, a community of 29,000 people on the eastern side of the Sierra Nevada where a 6.4 temblor had hit on Thursday morning.

Friday’s quake lasted about 30 seconds and was the strongest in Southern California in 20 years. Thousands of aftershocks followed.

Speaking to CNN, Pinky Panchal and Niket Aggarwal, who own Super 8 motel said, “I was checking a customer in and I was at the front desk and we had this little shake at 8:05 so went out, we went back in and right after that what we saw was massive.

“I just started crying, I just felt whether we are going to survive this or not, and then like every moment I was feeling that it was and we just ran to the Super 8 sign. We and other guests just held each other tight we were waiting for the shakes to stop,” Panchal said.

State and local emergency responders spent Saturday carrying out systematic assessments of property structures and checking for gas leaks in communities near the epicentre.

Transportation officials have also been able to reopen roads that had been damaged or had closed because of rock slides.

The overall damage from the earthquake wasn’t as severe as what officials had anticipated.

The governor also declared a state of emergency in San Bernardino County, where Trona, a community of about 1,800 people, is located.

The town, about 25 miles east of Ridgecrest, suffered significant damage and fires in Friday’s earthquake, according to state and local officials. The governor had previously declared a state of emergency for Kern County, where Ridgecrest resides, after Thursday’s quake.

The USGS said in a statement Saturday that millions of people in the region felt the shaking from the latest quake. The federal agency said it issued a red alert for economic losses from the quake, estimating the financial toll to be at least $1 billion.

Kern County Fire Department Chief David Witt said during a press conference Saturday that local responders were going from house to house in Ridgecrest to inspect properties, but so far they hadn’t found major collapses or anyone trapped.

University of Michigan Professor Ben van der Pluijm, who teaches in the Department of Earth and Environmental Science, said the two earthquakes are related but occurred within two nearby fault systems. That might explain why two relatively large quakes happened in such a short period time.

The activity doesn’t indicate a higher risk for a very large earthquake along the San Andreas fault, which is about 100 miles west from the eastern California shear zone, where these took place.