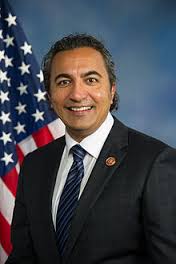 Washington, July 24 (IANS) Ami Bera, the lone Indian-American Democrat member of US Congress, has become co-chair of a bipartisan group of lawmakers who want “to stop partisan games and gridlock in Washington.”

Called “No Labels Problem Solvers” the new coalition of 81 members of Congress from both Democratic and Republican parties unveiled a package of nine “common sense bills to make government work!” at an event outside the US Capitol last week.

The group, he said was meeting regularly to build trust across party lines and find common ground to move US forward.

“The Make Government Work! package will achieve critical goals that both

Republicans and Democrats care about and save taxpayers billions of dollars,” Bera said

Bera said he would be a lead sponsor on one of the bills, the 21st Century Healthcare for Heroes Act, along with Republican colleague Chris Gibson.

This new bill would merge electronic health records from the Department of Defence with the Veteran Affairs to save taxpayers money, make the transition to civilian life easier for veterans, and help address the VA backlog, he said.

“Congress needs to be a place for service, where we focus on fixing problems, not fighting. That means putting an end to the finger pointing and name-calling and making Congress start working for America again,” Bera said.

After wowing the Big Apple, Modi off to win Washington