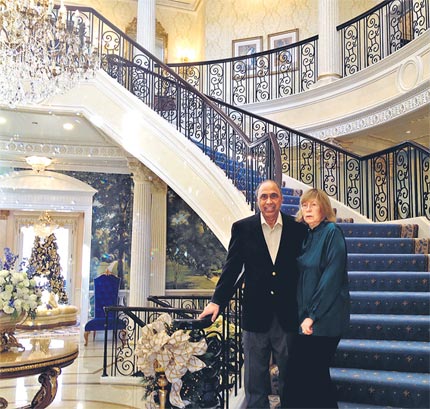 Washington, April 13 (IANS) He was born in Azamgarh, Uttar Pradesh, shifted to the US when he was just 15 and now lives in a 40,000-square-foot mansion that has a five-bedroom guest house and a backyard tea house along with reflecting pools on nine acres in Potomac, Maryland, a house that took six years to build.

After realising the American dream, Frank Islam, an India-born entrepreneur, investor and philanthropist who is said to be worth $300 million, is now ‘investing’ in the education sector in both the land of his birth and his adopted home.

“The investment is in the future of America and the American dream and in India as well,” said Frank Islam, who came from India as a 15-year old kid, set up the QSS Group, an information technology firm, in 1994, and sold it in 2007 after raising its revenues to over $300 million.

His contributions in India include a $2 million donation to the Aligarh Muslim University (AMU) to build the Frank and Debbie Islam School of Management with an endowed chair and building a technical college for girls in Azamgarh in memory of his mother Qumran Nisan.

“As a businessperson I do not make these contributions as charity but as investments for renewing and replenishing the American dream and to building strong futures for the citizens of America and India,” Islam told IANS in an interview.

Islam said he was investing in education in India and the US because it’s “the key to opportunity and the bridge to future success for those from all strata of society.”

“The greatest gift all of us can give is the gift of education,” he said explaining his support for numerous scholarships at higher education institutions in the US.

“While education is important in America, the needs are even greater in India and that is why I am supporting initiatives in my native land,” Islam said.

As minorities, females and those in rural areas in India are socially, educationally and economically disadvantaged, he was targeting his philanthropic investments to reach those populations.

“My intent is to use education as a tool and force to improve the socio-economic status of the underprivileged in India,” Islam said.

“My desire is that those who benefit will in turn contribute towards social, political and economic development throughout India.”

An alumnus of AMU, Islam said: “AMU helped shape the lives of many generations. Its leaders have shaped India’s history and its destiny.”

“I would not be the person I am if it were not for AMU education,” he said.

“My giving back to this great institution is a way of beginning to repay the University for what it helped me to become. I owe a sense of gratitude to AMU.”

The new school of management at AMU will be focussed on innovation, entrepreneurship and ethical business leadership, while the endowed chair will focus on international collaboration.

This will include faculty and students exchange programme with some universities and business schools in North America and other international universities.

Islam said he was naming the technical college for girls in Azamgarh after his mother who always “stressed the need for education and getting advanced degrees – even though she did not have one herself.”

“She could not be called a member of the women’s liberation movement but she was a liberator of the human potential,” he said.

As women in India still lag in the educational area beyond high school, Islam said: “They need to develop 21st century skills in order to be successful and to make their fullest contribution to their families and India in the 21st century.”

The Qumran Nisan College will provide technical, vocational and professional education at the post-secondary level and help women develop those 21st century competencies.

Islam said he was still awaiting approval from the Indian Home Ministry under the Foreign Contribution Regulation Act (FCRA) to allow him to send funds to India for the building.

“I am hoping we can secure that soon to bring this important initiative to fruition.”

Islam said he had also made a significant contribution to the US Institute of Peace (USIP) because President John Kennedy “is a role model of mine” as “he was a man of peace who called upon us all to get involved and to make a positive difference in our country and the world.”

“Another reason for being involved with USIP is my faith,” he said. “Being a Muslim has taught me many things – but the most important is that the whole purpose of religion is to provide justice and a path to justice for all of us.