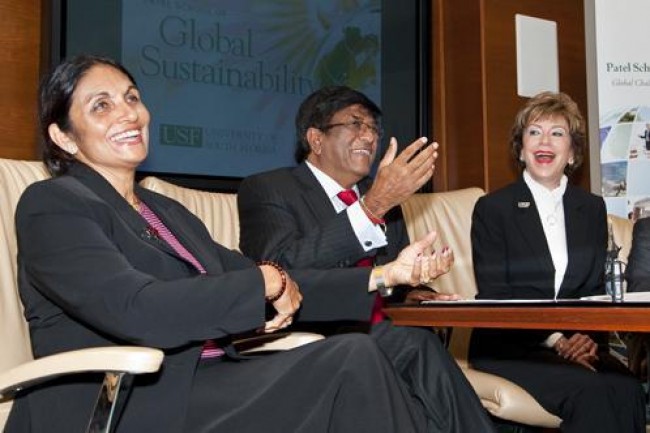 Fort Lauderdale (Florida) Sep 26 (IANS) With a $200 million commitment, an Indian American doctor couple has teamed up with a Florida university to bring world class medical education to India and potentially transform healthcare in the country.

In addition to the donation, Patel said that he was committed to spend $200 million by 2019 to set up a 40 hectare campus near Vadodara in Gujarat with Nova willing to expand their operations to India.

Lectures will be beamed to classes in Tampa with live interaction with professors from here. Later the same concept will be used for the proposed college in India, the Patels told IANS in an interview.

American professors would be positioned in India and Indian professors brought here to sort of train the trainers to academically produce students of the same calibre as those graduating in the US.

Going a step further the college will be accredited with American bodies to start residency in India, Kiran Patel said.

Indian students coming to the US will know how a world class institution works and Indian doctors will get an exposure to modern healthcare.

“By that you’ll be solving the crisis of paucity of healthcare in India,” he said, noting that students, residents and post-graduates will start providing services when the college opens.

Meanwhile, Kiram Patel said he was negotiating with an Indian partner to start a private university in India offering courses in arts, sciences and medicine.

To be named Kiran and Pallavi Patel University, it will start offering Indian degrees, while the American college operating from the same campus in India will offer American degrees possibly from 2020.

With the renamed Nova institutions in the US producing 500 graduates and India providing another 300, Kiran Patel said he looked forward to the idea of thousands of doctors coming out from the university to serve in an increasingly borderless world.

In India, a medical college is required to set up a 12.5 hectare campus with a 700 bed hospital.

Kiran Patel said he was also trying to sell a new concept where places of education just hold classes and instead of patients coming to a hospital doctors would be sent to various locations where needed like they do in the US.

He visualised a system where an american school in India will provide American degrees, while the indian school will offer indian degrees.

While there would be two types of degrees and two types of fees, the two institutions operating from one campus will offer same quality of education. In the next stage the concept could possibly expanded to Africa

Kiran Patel said his gift to Nova was the first step to realise his dream of enhancing healthcare in India.