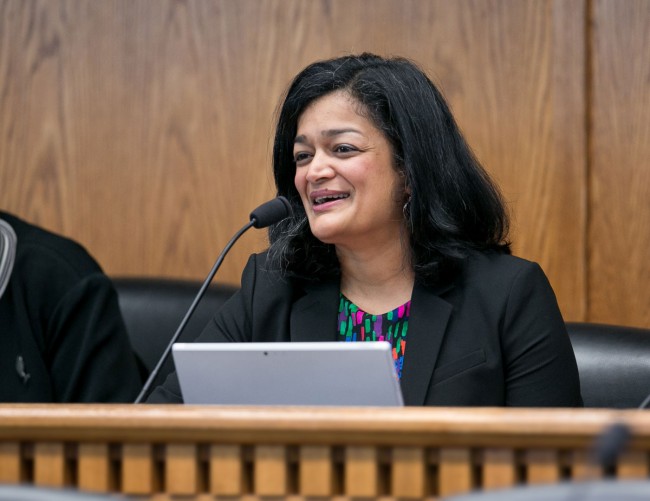 Instead, the Seattle Representative would be taking part in other events in her area.

Jayapal said in a statement on Sunday that she will remain in her Seattle district to “be with constituents who are immigrants and immigrant advocates to hear their stories and concerns, and discuss a plan of action moving forward”, according to a report in the Stranger newspaper.

“I was being specific about my duty as the Congresswoman for the 7th Congressional District to be right here in this district with constituents who are terrified about whether they’re gonna have a place in this city or country, and to make a plan for how we go forward,” Jayapal told her supporters during a rally at Westlake Park here.

“I wanted to be with kids who don’t know if their mom is gonna be there when they come home because of this President-elect’s policies,” she said.

“…I wanted to be right here with the immigrant advocates who are going to make sure that we continue to stand up and fight”.

Jayapal is one of more than 20 House Democrats who will not attend the inauguration.

The Democrats are boycotting the inauguration after Trump criticised US Representative and civil rights icon John Lewis, who said he doesn’t see Trump as a “legitimate President”.

Jayapal tweeted her support of Lewis on Sunday after Trump shot back that Lewis is “all talk, talk, talk”.

“If I had any doubts about my decision, however, my resolve has only strengthened in the past few days as I watched Donald Trump’s response to one of our country’s great civil rights icons and a personal hero of mine, Congressman John Lewis,” Jayapal said.

“With Donald Trump’s tweet, he himself has inflamed the situation and now two dozen of my colleagues will also not be attending the inauguration. It has become a boycott,” she said.