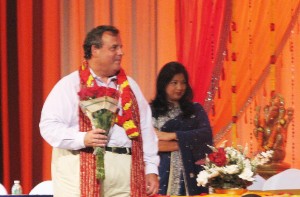 New Jersey, Nov 1 (IANS) The Indian Business Association of New jersey, home to a large Indian-American community, has endorsed Republican Governor Chris Christie, who is running for re-election to a second and final term in office.

Christie, who will face Democratic nominee Barbara Buono and six others in the Nov 5 election, won IBA’s endorsement during a stop on his statewide campaign tour Thursday “in the heart of New Jersey’s burgeoning Indian-American community,” according to NJ.com.

IBA which represents “the countless Indian shops and restaurants that populate the Middlesex County’s sprawling Woodbridge and Edison corridor”, had also endorsed Christie when he was elected in 2009, the website reported.

The group’s chairman Chandrakant Patel called the governor a friend of New Jersey’s nearly 292,000 Indian-American residents. “He always listens to us,” he said. “He tries to solve our problems.”

Christie, wife Mary Pat and son Andrew – a student at Princeton – greeted dozens of Indian-American supporters at Chowpatty, one of the many Indian restaurants on the stretch of Oak Tree that runs through the Iselin section of Woodbridge, NJ.com said.

The largest swath of New Jersey’s Indian-American community lives in the area: Of the 200,000 people who reside in Edison and Woodbridge, 50,000 are Indian-American, according to 2010 census numbers, the website said.

Christie’s visit came a day after his Democratic challenger Buono appeared in Edison to introduce the first-ever South Asian-American caucus to the state Democratic Party, designed to give voice to the New Jersey’s Indian-Americans.

Democratic state assemblyman Upendra Chivukula, according to NJ.com, called the caucus “a historic milestone in the political evolution of the South-Asian community and a victory for the state’s Democratic Party.”