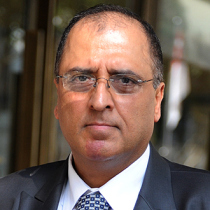 New York, Dec 27 (IANS) The indictment of the girlfriend of Manhattan’s Indian American antiquities dealer Subhash Kapoor has revealed the fake ownership histories of stolen Indian artefacts palmed off to museums across the world.

She is also charged with, more recently, helping to hide four stolen bronze sculptures as investigators closed in on Kapoor, according to chasingaphrodite.com, a specialized art website tracking “looted antiquities in the world’s Museums”.

Kapoor, described by federal investigators as one of the most prolific antiquities smugglers in the world, is now in custody in Chennai, where he is facing trial as the alleged mastermind of an international antiquities’ smuggling ring, according to the website.

Selina Mohamed, who was arrested last Friday, was charged with four counts of criminal possession of stolen property and one count of conspiracy, court records show.

She is the third person criminally charged in the case, following the indictments of Kapoor’s sister Sushma Sareen and gallery manager Aaron Freedman, who pleaded guilty to six criminal counts earlier this month.

There is also an arrest warrant out for Kapoor.

Prosecutors allege that since 1992 Mohamed has been involved in the fabrication of bogus ownership histories for dozens of objects Kapoor sold to museums around the world.

Since 2007, she also had nominal control over several of Kapoor’s storage facilities.

The possession charges relate to Mohamed’s alleged role in the disappearance of four of Kapoor’s stolen bronze sculptures — two of Shiva and two of Uma — valued at $14.5 million.

Kapoor instructed his gallery manager to send the Chola-era bronzes to Mohamed’s house in November 2011, the complaint states.

After federal agents with Homeland Security Investigations searched Kapoor’s Art of the Past gallery and storage facilities in January 2012, Mohamed insisted that the bronzes be removed from her house. They are now missing.

Among the artefacts identified in the complaint for the first time are a 10th-11th century sculpture of Lakshmi Narayana from northern India, now at the National Gallery of Australia.

The NGA bought it from Kapoor in 2006 for $375,000, records show. As Kapoor noted in promotional materials, “the treatment of the eyes is similar to that of another Lakshmi-Narayana from the temple at Khajuraho,” a world heritage site in Madhya Pradesh that contains some of the greatest masterpieces of Indian art.

Kapoor sold it to the museum in 2009 for $135,000, describing it as “one of the most important and unique examples of Goanese art to appear on the market in over a generation”.

For the first time, Friday’s criminal complaint lists several American museums that purchased objects from Kapoor and his associates, who the complaint says attempted to launder them with fabricated ownership histories.

They include, according to chasingaphrodite.com, a 12th century Vishnu Trivrikrama at the University of Florida’s Harn Museum in Gainsville, Florida and a 19th century painting at the Peabody Essex Museum in Salem, Massachusetts.

Mohamed also allegedly provided false provenance for a torso of a Vedata that was reported as stolen from Madhya Pradesh state’s Karitalai village in 2006 on the Interpol database, the complaint said.