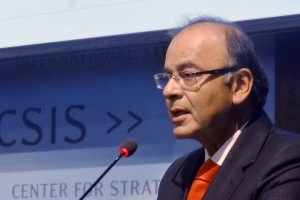 New York, June 19 (IANS) Wooing investors in the US, Indian Finance Minister Arun Jaitley has said that the Indian economy is revving up under Prime Minister Narendra Modi, offering them “a lot of potential” for gains.

“The India story can now be brought back to centre stage,” he told the Wall Street Journal here Thursday. “We were falling off the radar.”

“Important changes” are being made in government policies every week, said Jaitley, who is on a nine-day visit to New York, Washington and San Francisco where he will meet investors and chief executives.

Overhauls are moving ahead at “a rapid pace” and “there’s a lot of agenda still to cover,” Jaitley said.

He also expects Parliament to take action on measures to simplify the country’s tax regime.

The government, he said, is looking for compromises that would speed up passage of a new law aimed at easing the acquisition of land for development projects.

Referring to tax notices issued to foreign investors to retroactively pay a tax, known as the Minimum Alternate Tax (MAT), Jaitley said the tax notices were a legacy of a 2012 litigation and would be reviewed by the Indian Supreme Court.

“Once that judgment comes, MAT will get sorted out,” he said. Jaitley noted that the government has enacted a law saying MAT won’t apply to foreign institutional investors from April 1, 2015.

Meanwhile, in a conversation with Timothy Geithner, president of investment firm Warburg Pincus and a former US Treasury Secretary, Jaitley said that economic reforms in the legislative pipeline can push India’s growth rate above the 7 to 7.5 percent range.

“Neither the government, nor the people, nor the industry whose representatives, some of whom are here, nobody is very excited about a 7-7.5 percent growth rate in India,” Jaitley said at the Council on Foreign Relations (CFR), a leading think tank.

“Because a series of reform fixes which are in the pipeline and are to be implemented, we have now identified all the problem areas,”he said.

“I think one by one as we go resolving most of them, hopefully we should reach what our destination targets are,” Jaitley added.