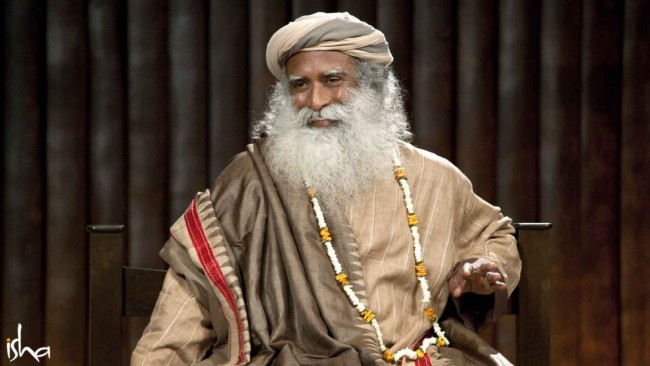 United Nations, June 21 (IANS) “Yoga is not Indian” and “it does not belong to India”, mystic and yoga master Sadhguru Jaggi Vasudev told a UN meeting on Monday with a rhetorical flourish.

He asserted that this was because yoga was “an absolute science and technology for well-being”. He added: “Science cannot be Indian” because of its universality and absoluteness.

“Yes, it originated in India,” he told a multinational audience of diplomats and international officials.

Vasudev was speaking at the Yoga Day eve event “Conversation with Masters: Yoga for the Achievement of Sustainable Development Goals (SDGs).”

As part of Yoga Day celebrations, a series of yoga poses were projected on to side of the UN Secretariat building on Monday night.

On Tuesday, Yoga Day will be formally celebrated with a yoga session at which Mogens Lykketoft, president of the General Assembly, will be the chief guest and Under Secretary General Cristina Gallach will be a featured speaker.

In his address, Vasudev focused on yoga as a science and technology for human betterment that, he said, went beyond just physical well-being.

The path to achieving those goals starts with the individual, he said. “You cannot transform the world without changing the individual. The world is a larger manifestation of who we are.”

Just the short-sighted pursuit of “well-being” can be counterproductive, Vasudev said, citing the ecological degradation that has resulted from it. Human well-being has to be addressed in a scientific way and everyone has to realise the universal oneness to achieve true well-being.

This is where yoga came in as a scientific way of obliterating individual boundaries, he said.

To popularise yoga, Vasudev said, begin with ‘upayoga’ for those who are not ready to deal with the spirituality of it. Upayoga starts with the physical and psychological aspects, he said.

“The significant aspect of my personal work has been to remove all the frills of culture that yoga had acquired through this millennia of transmission,” Vasudeve said.

“So one thing is to take off all the cultural frills and present it as an absolute science and a technology for well being.”

This was important in an environment where there were people of different nationalities, beliefs and ideologies, Vasudev said.

“It is very very important that yoga is brought as a proper science, not as a cultural thing, not as an Indian thing.”

India’s Permanent Representative Syed Akbaruddin said that “both aspects of yoga, mindful thought and mindful action, have a direct bearing on our collective response to global problems”.

The meeting was an attempt to “delve into this intellectual side of yoga and to relate it to the political vision we have collectively set ourselves in the form of the SDGs”, he added.

Tao Porchon-Lynch, who at 97 years is considered the world’s oldest yoga teacher in a formal setting, was the other yoga master at the meeting. She recalled her meeting with Mahatma Gandhi, who she said told her “not to be afraid. When you believe in something, go and do it”.

That advice helped her join the French Resistance against Nazi Germany during World War II, she said.

The World Health Organisation’s (WHO) executive director at the UN office, Nata Menabde, said yoga was India’s gift to the world and it was special because of that.

WHO was trying to integrate yoga and traditional practices into the allopathic medicine system and primary health services. To further this, India and WHO had recently signed an agreement.

Ambassadors gave personal testimonies of how they relate to yoga.

Liechtenstein’s Permanent Representative Christian Wenaweser said he had approached yoga from a “non-spiritual place” yet it helped him “connect to myself and to others.”

Wenaweser conducts yoga lessons for diplomats and others at the UN.

Masud Bin Momen, the Permanent Representative of Bangladesh, said he was suffering from sciatica and yoga was the answer to his condition, especially the cobra pose.

Vasudev said that whatever became popular was susceptible to commercialisation. “On the surface there may be disturbance, but the core is undisturbed.”