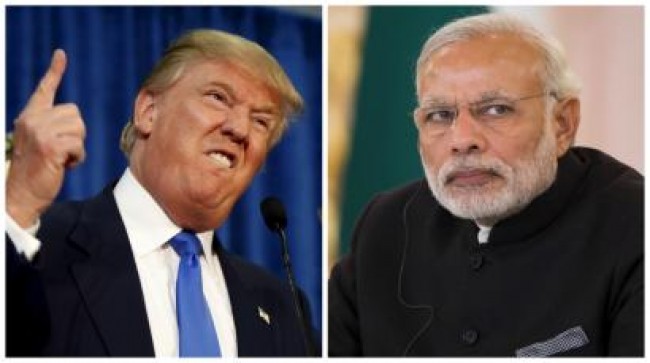 Washington, Jan 3 (IANS) US President Donald Trump has mocked Prime Minister Narendra Modi over funding a “library” in war-torn Afghanistan, saying it is of no use there as he criticized India and others for not doing enough for the nation’s security.

It was unclear to which “library” project Trump was referring to. His comments were dismissed by India, with sources in New Delhi saying that the government does not send troops abroad except under specific UN mandate.

In his first Cabinet meeting of the year on Wednesday, the US President railed against a litany of perceived injustices, including a lack of international support for Washington in conflicts in the Middle East and Asia, the Independent reported.

Trump asked India, Russia, Pakistan and other neighbouring countries to take responsibility for Afghanistan’s security as he defended his move to withdraw troops from that country.

He referred to Prime Minister Modi as an example of how world leaders were talking about their contributions that were nowhere near the billions of dollars the US was spending.

“I could give you an example where, I get along very well with India and Prime Minister Modi, but he’s constantly telling me he built a library in Afghanistan. Ok a library. That’s like, you know what that is? It’s like five hours of what we spend (in Afghanistan),” Trump told his Cabinet members.

“And he (Modi) tells me. He is very smart. We are supposed to say, oh thank you for the library. Don’t know who’s using it (the library) in Afghanistan. But it’s one of those things. I don’t like being taken advantage of.

“I say this, India. (I have) great relationship with Prime Minister Modi. He is a great gentleman and a great man and he’s done a fantastic job. He has brought the country together,” he said.

Though India has not put its boots on Afghan soil, it has played a key role role in the reconstruction efforts of the war-ravaged country, including key infrastructure projects.

These include construction of the 218-km road from Zaranj to Delaram for facilitating movement of goods and services to the Iranian border, the 220kV DC transmission line from Pul-e-Khumri to Kabul and a 220/110/20 kV sub-station at Chimtala, the Salma Dam with an installed capacity of 42 MW and the new Afghanistan Parliament building.
Also, over 3,500 Afghans are undergoing various training programmes in India. There is a special scheme of 1,000 scholarships per annum for Afghan nationals under the Indian Council for Cultural Relations (ICCR) and 500 Indian Technical and Economic Cooperation (ITEC) slots for Afghanistan annually.
India also provides humanitarian assistance to Afghanistan.
These include the supply of 1.1 million MT of wheat to Afghanistan and setting up the Indira Gandhi Institute of Child Health (IGICH), a 400-bed hospital in Afghanistan that caters to the well-being of children from all across that country.
India encourages private investment in Afghanistan besides community development projects including in education, health, agriculture, irrigation, drinking water, renewable energy, flood control, micro-hydropower, sports infrastructure and administrative infrastructure.
Boosting connectivity is also a key pillar of India’s partnership with Afghanistan.
The Chabahar port on the southeastern coast of Iran jointly being developed by India, Iran and Afghanistan is one such example.
India is investing $500 million to develop the Chabahar port and a road link from there to Afghanistan to give access to that country, bypassing Pakistan.
The port is also a key link in the International North South Transport Corridor (INSTC), a 7,200-km-long multi-modal network of ship, rail and road routes to move freight between India, Iran, Afghanistan, Armenia, Azerbaijan, Russia, Central Asia and Europe.