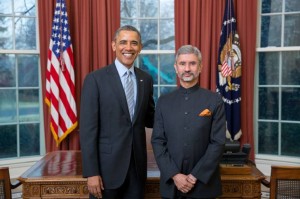 Obama also wished Jaishankar success in his responsibilities as he presented his credentials to the president at the Oval Office of the White House Monday, according to the Indian Embassy.

Jaishankar also assured Obama of his commitment to expand key pillars of the bilateral relationship, including economic relations and trade ties, defence and security, energy, science and technology and global issues.

Jaishankar was second of the six ambassadors who Monday presented their credentials to Obama one by one in a traditional ceremony that marks the formal beginning of an ambassador’s service in Washington.

Although he formally presented his credentials to Obama only Monday, Jaishankar has spent the last couple of months since his arrival here on Christmas eve to put the India-US relations back on track after the diplomatic row over the Khobragade affair.

Jaishankar, who played a key role in negotiating the landmark India-US civil nuclear deal and other initiatives, used his wide contacts within the Washington bureaucracy dealing with South Asia to defuse the crisis over the Dec 12 arrest and strip search of India’s then consul general in New York, Devyani Khobragade.

Coming to Washington after four years as the Indian ambassador in China, Jaishankar succeeded Nirupama Rao, whom he had replaced in Beijing too when the latter returned to New Delhi to become foreign secretary.

Joining the Indian Foreign Service in 1977, Jaishankar earlier spent three years from 1985 to 1988 as first secretary handling political affairs at the Indian embassy in Washington.

He has also served as India’s ambassador to the Czech Republic, high commissioner to Singapore and as head of Americas Division in the external affairs ministry.

Jaishankar holds a PhD and MPhil in international relations and an MA in political science. He is a member of the International Institute for Strategic Studies in London. Jaishankar is married to Kyoko Jaishankar and the couple has two sons and a daughter.