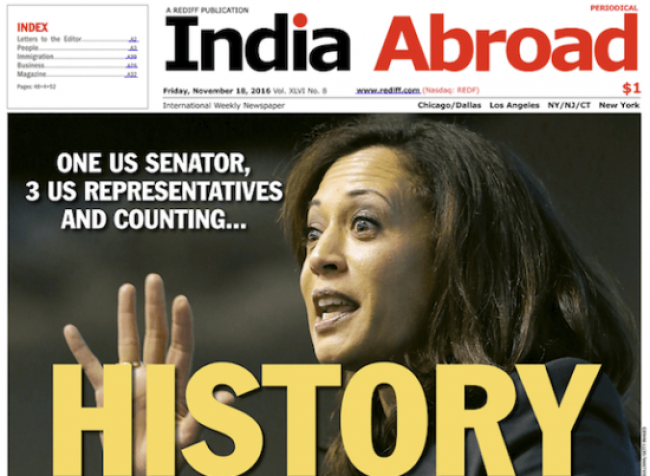 New York, Dec 8 (IANS) India Abroad, the oldest continuously published Indian-American newspaper, has been sold by Rediff to 8K Miles Media, a company that publishes a Tamil magazine in Silicon Valley and runs a multilingual radio service, according to an editor’s note in the newspaper.

Without any details of the transaction, the unsigned farewell note from the Rediff management’s editors in the latest issue said tersely, “Rediff.com hands over the torch to 8K Miles Media”. Nikhil Lakshman was the Editor-in-Chief and Aziz Haniffa the Editor.

No public filings about the transaction with regulators or markets could be found.

Shares of Rediff, whose board chairman is Ajit Balakrishnan, closed down nearly 8 cents to 15 cents a share on the Over The Counter (OTC) Market in New York on Friday, the day when the sale became public. After some fluctuations, it closed on Wednesday at 17 cents. Rediff is described as an e-commerce and digital news and information company.

India Abroad newspaper was founded in 1970 by the late Indian American media entrepreneur and publisher Gopal Raju and emerged as the independent American chronicler of news about Indians abroad, India and India-US developments, and the voice of Indian Americans. Besides New York, it had published editions in Canada and Britain.

Raju sold the newspaper in 2001 to Rediff, a Mumbai-based publicly traded company.

The newspaper, which once had a circulation of over 60,000, has seen a steady decline. In the October postal declaration, the circulation was shown as less than 18,000. Its full-time news staff based in the US has shrunk to four after a series of layoffs and it was produced in India.

Amid mounting financial pressures, Rediff had also shut down last year “India in New York”, a free-distribution weekly newspaper it had started.

On its website, 8K Miles Media Group describes itself as an “umbrella Media Holding aiming to consolidate highly fragmented South Asian Indian media market”. Its board chairman is Suresh Venkatachari, a technology entrepreneur who has founded four companies. He is currently the CEO of 8K Miles, a Silicon Valley technology company.

The 8K Miles Media company publishes Tamil Express magazine from the Silicon Valley and its 8K Radio broadcasts over the air in the New York region and digitally elsewhere.

Under the ownership and editorship of Raju, India Abroad had a global team of full-time and contributing correspondents across the world, in the Americas, Asia, Europe and Africa and this was the foundation on which IANS, then known as India Abroad News Service, was launched in 1985.

When the weekly India Abroad newspaper was sold to Rediff, IANS was renamed Indo-Asian News Service and became a New Delhi-headquartered independent news organisation which has today grown to become one of India’s leading news agencies.

Under Raju’s leadership, India Abroad pioneered in promoting Indian American participation in US politics which this year saw the culmination in the election of five of them to the US Congress — Kamala Harris to the Senate and Ami Bera, Raja Krishnamoorthi, Pramila Jayapal and Ro Khanna to the House — and the appointment of Nikki Haley to a cabinet-level post.