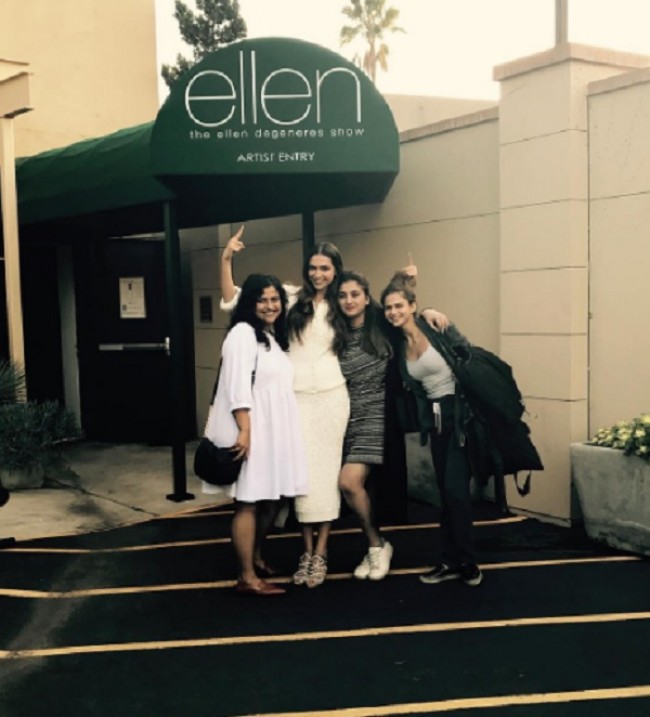 Los Angeles, Jan 18 (IANS) During her debut appearance on world famous chat show “The Ellen DeGeneres Show”, Indian actress Deepika Padukone revealed she has a big crush on Hollywood action star Vin Diesel and said that in her head, she has “amazing babies” with him.

When DeGeneres said, “There is a romance going on, that’s what you would get from that as well… Look at that face! Does that mean there is?”, Deepika responded: “Well, there is no smoke without fire!”

The episode featuring Deepika, who wore a classy and subtle white dress to the show, will air in the US on Wednesday and in India on Thursday.

Deepika also said she wasn’t informed that she got the role till the end.

She said: “I actually auditioned for ‘Furious 7’ about two or three years ago and for whatever reason that didn’t work out and I think people remember me for that audition. Everyone talks about that chemistry and people remember me from that and then, about a year ago, I get a call from Paramount saying that they are casting for this film and I flew down and met DJ, my director Caruso, and then Vin found out in Los Angeles that I was in Toronto. So overnight, luckily I had a visa, and he said, ‘I want her to come and see me’.”

“So, overnight I flew down from Toronto to Los Angeles to see Vin and suddenly in the middle of the night we are doing this forty-five minute photo-shoot. Professional, with lights, with this and that, I was like what is going on! Because I didn’t know if I got the part, I still don’t know if I got the part. He just… we got into this really serious photo-shoot. I don’t know if you guys have seen the picture, and that was it.”

Deepika was also confused when Diesel made the news of her casting public with a poster.

Back home, Deepika will next be seen in Sanjay Leela Bhansali’s “Padmavati”.