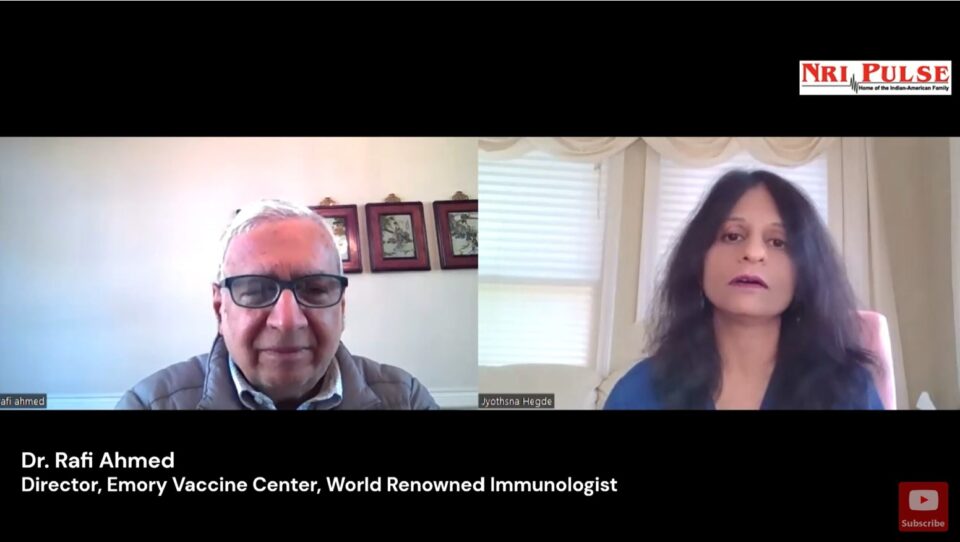 A CONVERSATION WITH DR. RAFI AHMED, DIRECTOR OF THE EMORY VACCINE CENTER

The collaboration between the scientists at the Delhi-based International Centre for Genetic Engineering and Biotechnology (ICGEB), funded by the ICMR and Emory Vaccine Center (EVC) effectively neutralizes a wide range of SARS-CoV-2 variants including Alpha, Beta, Gamma, and the different Omicron sub-lineages including, BA.1, BA.2 and others., Dr. Rafi Ahmed, Director, Emory Vaccine Center, told NRI Pulse. The antibody has been tagged 002-S21F2.

002-S21F2 is a dream come true for scientists and researchers who, since the emergence of the pandemic, have been in pursuit of a single antibody that can fight not only one strain of the virus but subsequent variants.

How did the discovery come about?

002-S21F2, Dr. Ahmed says, is a result of research carried out on patients in India who had mild cases of the original Wuhan strain of Covid-19. The collaborative research was carried out by ICGEB in partnership with the National Institute of Malaria Research (ICMR-NIMR, New Delhi) working with the Emory Vaccine Center (Atlanta, USA).  Dr. Ahmed credits the discovery to Dr. Anmol Chandele, who serves as the Group Lead at ICGEB and resides in Delhi and Dr. Murali-Krishna Kaja, who splits his research time between Atlanta and New Delhi.

The screening of single-cell Memory B cells, the organisms that create lifelong immunity to infecting pathogens, derived from covid-19 recovered patients from India was the base of the research and discovery.

What is a monoclonal antibody?
Antibodies target particular cell surfaces and either destroy the infected cell or eradicate the virus from the host. Monoclonal antibody (protein) is produced from a cell line made by cloning a unique white blood cell.

“Scientists at ICGEB generated a batch of over 300 different antibodies that came from different patients in India who were affected by the original Wuhan strain,” Dr Ahmed says. “At the time, there were no new variants. So most of the antibodies that were generated by our lab were able to neutralize the Wuhan strain, and not surprisingly, did not react effectively with other strains, because typically antibodies are very effective against the strain the infected them.”

But the team was lucky.

“Two, out of the 300 or so monoclonals we discovered, were broadly cross-reactive, and one antibody, in particular, is a very rare one as described anywhere. It not only neutralized the Wuhan strain but the Delta, Beta and also Omicron and its sub-lineages including, BA.1, BA.2 and many others. And then a group of structural biologists at Emory in Atlanta, with Dr. Anamika Patel and Dr. Eric Ortlund researched reasons to find out why the antibody was so successful in neutralizing all the variants.”

“It turned out that this (antibody) is seeing a very unique part of the spike protein (the spike you see in the pictures everywhere) is what binds to the cellular receptor. So, if that is blocked, the binding is blocked. This monoclonal was seeing it from an angle which was common to all variants and not limited to any one type. It is actually a better monoclonal in terms of any of the other licensed monoclonals across the world. They are not as effective as this one,” Dr. Ahmed elaborated.

How is 002-S21F2 so effective against all variants?
Unlike other monoclonal antibodies that target the (virus) areas that are a hotspot for mutation, 002-S21F2 attacks the protein spikes (portion of the virus) that remain the same across all variants. It targets a highly conserved area on the outer surface of the receptor binding domain of the virus, and with 002-S21F2 being broad-spectrum, neutralizes all the known variants. And since it is derived from human strains, tolerance is not an issue.

Patent, commercialization, and relevance to public

ICMR, ICGEB, Department of Biotechnology and Emory jointly hold the patent on 002-S21F2.

“If produced quickly it could be of great value, particularly in immuno-compromised patients, or someone who is really sick or for people with cancers related to immune systems, lymphoma, multiple myeloma, or transplant patients who are on immunosuppressive regimen who cannot be given vaccines,” he added.

Antibodies cannot be administered to everybody. They have a short half life – meaning they disappear from the body after a few weeks because there is nothing to produce it. While vaccines can be made available to everyone, antibody treatments are the solution to specialized cases with immediate requirements such as immunocompromised cases mentioned above.

Where are we at in the course of the pandemic?

“The real threat of the pandemic is much less now. We have effective vaccines. But I must emphasize that vaccines are not that effective in preventing infection and mild symptoms, but they are very effective against preventing severe disease. I think our best defense or the best way of continuing to control the pandemic is still vaccination. We will have to learn to live with it like influenza. While it is still dangerous, like the flu, it is not a pandemic situation,” Dr. Ahmed said. With vaccinations, antivirals and antibodies like 002-S21F2, Dr. Ahmed is optimistic that patients can be treated with more options, depending on their needs and severity.

The ICGEB is a unique intergovernmental organization initially established as a special project of UNIDO. Autonomous since 1994, it runs over 45 state-of-the-art laboratories, in Trieste, Italy, New Delhi, India and Cape Town, South Africa and forms an interactive network with almost 70 Member States, with operations are aligned to those of the United Nations System. It plays a key role in Biotechnology promoting Research excellence, Training, and Technology Transfer to industry, to contribute in concrete terms to sustainable global development. Currently, 700 people, from over 40 different countries, work at the ICGEB, of which almost 600 are scientific personnel, including research scientists, postdoctoral fellows, PhD students, research technicians.

Dr. Ahmed recounted the times when the initial Scientific Advisory Committee SAC (O*) was formed to engaged Indian origin researchers and scientists working *overseas to contribute their knowledge to develop research center in India. He has been on the SAC (O*) since 1994 for the Department of Biotechnology, which is part of the Indian Ministry of Sciences.  He was part of the initial 10-member committee that included biomedical scientists in various areas of expertise in the field, from across the world. Dr. Ahmed was the representative for Immunology and vaccines. The 10 eminent scientists, he said, directly reported to the head of the Department of Biotechnology in India. While some scientists made annual visits, Dr. Ahmed made more frequent trips. It was through this relationship he established with the ministry, and Manju Sharma, that he initiated talks about establishing relationships between EVC and ICGEB.

In 2008, the Emory Vaccine Center and the International Center for Genetic Engineering and Biotechnology (ICGEB)– launched the Joint ICGEB-Emory Vaccine Center in New Delhi. The goal of this partnership is to facilitate international collaborations in vaccine research for tackling infectious diseases of public health importance in developing countries. Since its launch, the center has focused on the pathogenesis and immunology of HIV/AIDS, tuberculosis, hepatitis C, dengue virus, malaria and other infectious diseases that disproportionately affect the developing world. When coronavirus hit the world, ICMR approached Dr. Ahmed of EVC, since, as he put it – “they knew we had the expertise in the field of immunology and this technology of developing B cells was already operative there since we had done the same thing for dengue, and others.”

Why the specific engagement in India?

“We are from India,” Dr. Ahmed said, adding that talented and intelligent youngsters from world renowned institutes in India was an added bonus. The area of interest, he noted, was the field of human immunology because this was an area that was not very widely studied. “While we wanted to give back to the country we came from, we also wanted to develop an area that was under-developed at the time (late 90s). Dr. Ahmed credits Dr. Raj Bhan, who he describes a visionary, the secretary of DBT at the time, Dr. Virander Singh Chauhan, director of ICGEB at the time and Kapil Sibal, India’s science minister at the time who supported his proposal for the collaboration between EVC and ICGEB.

What are the future goals for the collaboration with India?

Having renewed the partnership for five more years, Dr. Ahmed said the partnership with ICGEB will continue working on Covid, since it is not gone permanently as yet. “We will also look into Dengue in more detail. Several Dengue vaccines have been produced and they’re not licensed yet,” he said adding that clinical trials will be done in India, looking at Dengue vaccines that have been developed, or are being developed in India by Indian pharmaceutical companies. And EVC will play a role in analyzing immune responses in those vaccinated individuals. “Essentially our goal is to help in analysis of human immune responses, or vaccines or predictions and developing new agents like this.”

Dr. Ahmed said that Emory was also trying to extend partnerships in India with other institutions, particularly going into cancer space.  “Our next major step in India will be cancer immunotherapy. Dr. Suresh Ramalingam, Executive Director, Winship Cancer Institute of Emory University and I are currently collaborating with Tata Memorial Cancer Center in Mumbai,” he noted.

How can the Indian American community strengthen these relationships/partnerships with India?

Emory and its leadership have been very generous, and supportive to the vaccine center including doing research in India, Dr. Ahmed said. But the actual research has been done by funding from the NIH, or from the Ministry of Science and Ministry of Health in India.

“But what we’ve not had so far is a very wonderful philanthropist/s who will say, you know, you’re doing great work and we would like to support your work,” he said, while appealing for funding from interested individuals.

What are your perspectives on the future of biomedical science research in addressing future pandemics and diseases of global concern?

“I think it’s very good. I think we are very optimistic because there is huge interest in this area. Lots of smart young people are going into this field. And there’s actually very good support from the government. I think both in the US locally, in Europe, and also in India, too. There’s a lot of support for pandemic preparedness, infectious diseases, and just biomedical research in general. And I think in some ways the most important is that the pharmaceutical industry is investing very well, not only just in producing the products but also really expanding and improving their research capabilities. New technologies are developing, like mRNA technology, and many others. Many new different cancer immunotherapy approaches are being developed by Merck and BMS Genentech and Roche. As far as biomedical research goes, I think this is one of the most exciting. I would encourage all young people to go into this area,” concluded the world-renowned expert in immunology.