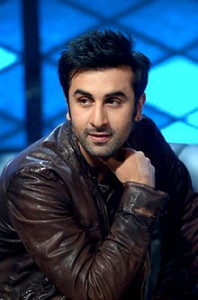 Mumbai, May 25 (IANS) Born in a family of cinestars, Bollywood’s star actor Ranbir Kapoor says he never entered filmdom with the intention of becoming a star. He also said the current crop of actors are no comparisons to the likes of Shah Rukh Khan and Salman Khan, who have an “aura” about them.

Ranbir, who has proved his mettle film after film since debuting with unimpressive “Saawariya” in 2007, credits the media with giving him the “pedestal” of a star.

“I am not here to be a star, I am here to be an actor. We have grown up watching Mr. Shah Rukh Khan, Mr. Salman Khan, Mr. Akshay Kumar or Mr. Ajay Devgn on the screen. They have an image, aura and stardom,” Ranbir told IANS in an interview.

“That (in their) time, they didn’t have (so much) media, but media has helped us a lot. It has put us on a pedestal. We are created stars,” he added.

The 30-year-old, son of veteran actors Neetu and Rishi Kapoor, and grandson of the legendary Raj Kapoor, believes his generation of actors need more time to prove themselves.

Talking about himself, he said: “It’s been only 10 films. I don’t take these tags (of a star) seriously. If someone compares me to them (stars like Shah Rukh, Salman, Akshay and Ajay), they must be embarrassed as these actors have been working for 25 years. I have just completed five years.”

Nevertheless, he finds it “encouraging” and he truly hopes, “I can live up to this.”

Even within five years of his Bollywood journey, Ranbir has shown an impressive variety with films like “Raajneeti”, “Rockstar” and “Barfi!”. He feels taking a “different path” helps people “recognise your work”.

Moreover, he feels it is vital for an actor to create his own “niche”.

The only ideology Kapoor goes by before selecting a film is whether people will like to watch it or not. He feels that it is important to make your own niche.

“When I heard ‘Barfi!’ and ‘Rockstar’, I thought of them as commercial films. I thought that these are films which I will want to see. So, (as an actor) you must have your own point of view.

“If you feel that people will like the film, then do it. If I see a (script of) ‘Dabangg’ or ‘3 Idiots’, no one will let me do it. They will say we have Salman Khan and Aamir Khan (respectively) to do it. You have to make your own niche,” he said.

Never one to take the audience for granted, Ranbir said: “You want to reciprocate their support by giving them a good film. I just have to give them good movies and be good at my work.”