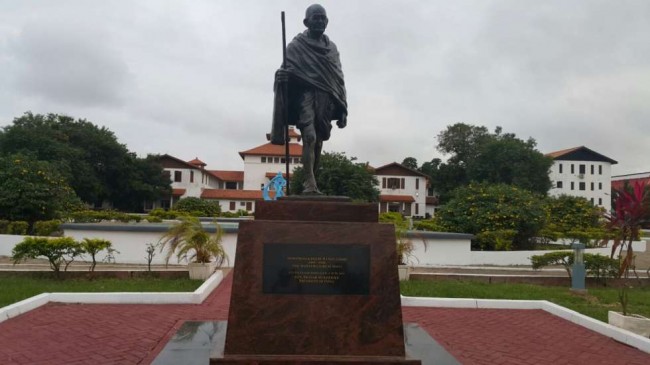 Accra, Oct 6 (IANS) The Ghanaian government has decided to relocate a statue of Mahatma Gandhi from the University of Ghana near Accra, following a move by a group of lecturers to have the statue pulled down over alleged ‘racist’ views expressed by Gandhi.

The decision was taken to ensure “its safety and to avoid the controversy on the Legon Campus becoming a distraction from our strong ties of friendship that have existed over the years”, a statement by the Ministry of Foreign Affairs said.

“The unfortunate verbal attack on Mahatma Gandhi is effectively an attack on an Indian nationalist hero and icon, who is revered and cherished by over one billion people who are either citizens of India or persons of Indian decent,” the statement said.

The petitioners seeking relocation of the statue were led by a former director of the Institute of African Studies at the Legon university.

Last month, Professor Akosua Adomako Ampofo led a group of lecturers to petition the University Council to remove the statue and listed, among other things, some remarks that Gandhi had made as far back as 1894 in South Africa.

They quoted Gandhi as saying: “A general belief seems to prevail in the Colony that the Indians are little better, if at all, than savages or the Natives of Africa. Even the children are taught to believe in that manner, with the result that the Indian is being dragged down to the position of a raw Kaffir,” and contended that these were racist comments.

The group based their arguments on what, they said, had happened at other world class universities recently and mentioned Yale University in the US where it said: “Former bastions of slavery, apartheid and white supremacy, statutes and other symbols associated with controversial persons have been pulled down or removed.”

The statue of Mahatma Gandhi was unveiled by President Pranab Mukhereje during his state visit to Ghana in June this year.

The statement said Ghana’s relations with India date back to the early 1950s when Ghana’s then President Kwame Nkrumah struck a strong bond of friendship with Prime Minister Jawaharlal Nehru.

“Diplomatic relations were soon established after Ghana’s independence in 1957. The two countries have since shared common positions on many issues of international concern,” it said.

“Ghana and India have championed the struggle for the liberation of oppressed peoples around the world and were strong in their condemnation of the obnoxious policies of the apartheid regime in South Africa,” it added.

“It is worthy of note that the statue of Mahatma Gandhi was erected on the University of Ghana campus with the consent of the university authorities. It was not compelled by the government to accept the statue,” the ministry said.

The statement acknowledged that human as he was, “Mahatma Gandhi may have had his flaws,” and said, “we must remember that people evolve. He inspired movements for civil rights and freedom across the world.”

“In a global interconnected world where conversations that take place on social media are shared in real time, there is the potential to create disaffection not only at the level of government relations, but also between people not only in our country but all over the world,” the statement added.

It also urged Ghanaians to look beyond the comments attributed to Mahatma Gandhi and acknowledge his role as one of the most outstanding personalities of the last century who demonstrated non-violence.