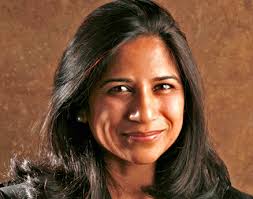 Washington, Dec 21 (IANS) Hyderabad-born attorney Nandita Venkateswaran Berry has been appointed the Secretary of State for Texas, making her the first person of Indian origin to hold the third top executive job in the southern state.

Announcing the appointment of Berry, 45, Governor Rick Perry called the Houston-based attorney one of the most accomplished in the state. She steps into the office Jan 7.

As the 109th Texas Secretary of State, Berry would also become the state’s chief elections officer; the governor’s liaison on border and Mexican affairs and Texas’ chief protocol officer for state and international matters.

Her office also serves as the formal repository for official and business records; publishes government rules and regulations, keeps the state seal and attests to the governor’s signature on official documents.

Berry has been on the board of several institutions including the Houston Zoo, the South Asian Chamber of Commerce, the Houston Area Women’s Centre, and the Community Family Centre of Houston.

“Nandita Berry personifies what is possible through hard work and dedication in the State of Texas,” Perry said in a release.

“Arriving from India at the age of 21 with nothing but $200 to her name, she worked diligently to earn her law degree and has since become one of the most accomplished attorneys in the state.

“Her work ethic, intelligence and wide array of experiences will serve her capably in her new duties as Secretary of State, and I look forward to working with her to keep Texas the best place in the country to live, work and raise a family.”

“I am truly humbled to follow in the footsteps of Stephen F. Austin, Texas’ first Secretary of State,” Berry said.

“Like him, I came to Texas in search of a better life and the limitless opportunities to be found across our great state. Every day, I see Austin’s pioneering spirit alive in Texas, and this great honour proves once again Texas is the land of opportunity, both in the private sector and public service.”

She has a Bachelor of Arts degree from Mt. Carmel College, Bangalore. After coming to the US, Berry got another bachelor’s degree in political science from the University of Houston.

She got her law degree from the University of Houston Law Centre in 1995, and was admitted to the Texas bar the same year.

Currently, she is a senior counsel with the law firm of Locke Lord LLP, where she practices corporate and securities law as in-house counsel for El Paso Corporation, one of North America’s largest independent natural gas producers.