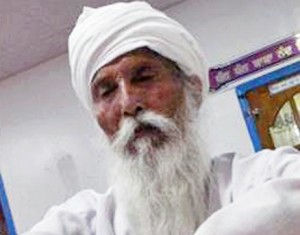 Washington, Oct 22 (IANS) A US court’s ruling that a homeless man is legally incompetent to stand trial for attacking a 82-year-old Sikh man with a steel rod outside a Sikh Temple in central California has shocked the community.

Gilbert Garcia Jr., 29, accused of attacking Piara Singh outside the Nanaksar Sikh Temple in southwest Fresno on May 5 in what the prosecutors have called a hate crime was ruled unfit for trial by a Fresno County Superior Court judge Monday,

Harrell then scheduled a Nov 19 hearing to determine where to send Garcia for treatment. Until the placement decision is made, Garcia will be held in the county jail.

The Bee citing Fresno police said Singh was approached by a bicyclist at Cherry and North avenues just after 7 am May 5. Without saying a word, the attacker beat Singh in the head and body with a rod. Singh’s injuries included broken ribs and head wounds.

Members of the Sikh community are frustrated with the court ruling local TV station KFSN reported.

“We just want justice served in this particular case. I hope he’s not just skirting around the system,” Paul Sihota, a community member was quoted as saying.

“It’s a sad day,” he added. “Hopefully there’s another go around where it can be determined and he can be tried for the crime he did.”

“Sikh’s wearing turbans, we are not terrorists, and we are not Taliban. We’re peace-loving citizens of America,” he said.

They are looking forward to increasing awareness of the Sikh community and getting to know those around them. Last year, the California state legislature designated November as “Sikh Awareness and Appreciation Month”.

This year, local leaders are encouraging everyone to get involved by taking part in a community event like the 5k run sponsored by the Sikh Women’s Alliance scheduled for Nov 10, KFSN reported.