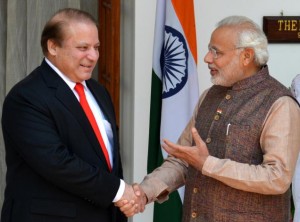 Washington, May 28 (IANS) Welcoming the meeting between India’s Prime Minister Narendra Modi and his Pakistani counterpart Nawaz Sharif, the US said it supported all efforts to strengthen dialogue and cooperation between the two neighbors.

“We continue to welcome any and all steps India and Pakistan take to strengthen and deepen their dialogue and cooperation,” State Department spokesperson Jen Psaki told reporters Tuesday.

“We applaud any efforts between India and Pakistan to create economic opportunities for the people of both countries that can contribute to a more secure, stable and prosperous region,” she said.

“So we certainly support and applaud the news of the weekend.” Psaki said taking note of Sharif’s visit to India for Modi’s swearing in and their subsequent bilateral meeting.

Asked if the US played any role before or during the meeting, the official said: “Not that I’m aware of, no.”

On Modi’s “overture” to see Bangladesh and Pakistan on the same frontline in containing extremism, Psaki said: “Well, we’ll see what happens.”

“Obviously, we support efforts to address terrorism around the world, but I don’t want to speculate on events that haven’t yet happened.”

The official said “our charge on the ground represented the United States” at Modi’s swearing-in ceremony in keeping with tradition.

“Because typically with India inaugurations, there isn’t a high-level US official sent or necessarily invited, so it’s typically attended by someone on the ground.”

Asked if the US will help the new Modi government to bring back black-market money stashed abroad by corrupt Indian politicians, the US official said: “As soon