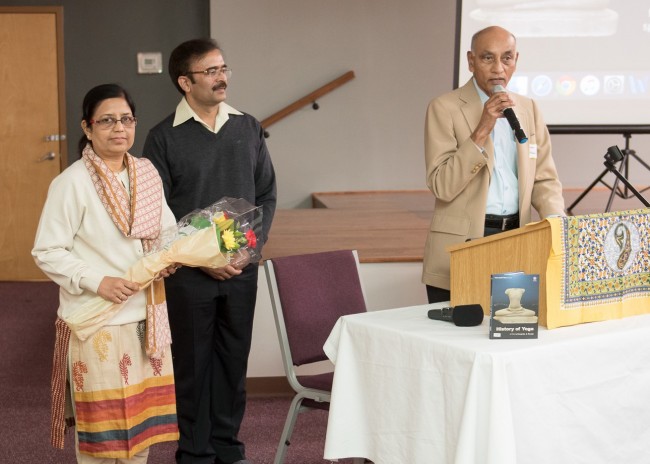 Atlanta, GA: India Awareness Foundation and Sewa International with other supporting organizations had organized the screening of a path defining Yoga film ‘History of Yoga’ researched and produced by Deepika Kothari and Ramji Om from India at Chinmaya Niketan, Norcross, GA on March 25, 2016. Nearly 175 invited guests, yoga teachers, practitioners and enthusiasts were enchanted by the most authentic and lucid history of yoga enumerated in the documentary.

While welcoming the guests, Dhiru Shah, President of India Awareness Foundation (IAF), emphasized the importance of knowing the correct and accurate history of any nation or civilization in planning for the future. He further stated that history is always written by conquerors and not by the vanquished and quoted an old adage to support his argument: “Until the lions have their own historians, the history of hunt will always glorify the hunter.”

Shah further stated that European colonialists and Indologists have distorted Indian history during the last 300 years which has done a great damage to the psyche of the Indian people and the nation as a whole.  He quoted George Orwell as to why history gets distorted:  “The most effective way to destroy a people is to deny and obliterate their own understanding of their history”.  He stated that it therefore important to rewrite the Indian history based on the current findings from archaeological excavations, DNA research, astronomical and carbon dating, satellite imaginary and literary evidences.

Shah introduced Deepika Kothari as a scientist with a Ph. D in physics whose scientific papers have been published in national and international journals and whose current interest are in research, writing and film making on Indian thought and cultural heritage.

Ramji Om was introduced as a mathematician, officer of the Indian Administrative Service (IAS) working for the Indian Railways and an ardent yoga practitioner who has done the research and screen writing for the film “History of Yoga’.  He has studied Indian history and dharma scriptures and has delivered many talks on yoga and Indian civilization inIndiaand abroad.

Dhiru Shah recognized community leaders, Shobha Swamy of Aims for Seva, Manhar Valand of Chinmaya Mission and Yashwant Belsarey of Sewa International for their dedicated selfless service and help in organizing this program.

Deepika Kothari explained in detail the efforts, time taken at personal cost thereof in producing the film ‘History of Yoga’. Six years of extensive research, writing and filming has gone into presenting a balanced, rational and authentic view with the contribution of eminent scholars from the field of Art History, Archaeology, History, Philosophy, Medicine, Literature and Yoga. 35000 kms travel, 100s of permissions, 87 Archaeological sites, 35 Museums & Libraries,Templeand shrines have built this story.India’s magnificent Iconography,TempleArt, Diverse Culture & living traditions, Ancient Relics, Wall paintings, Manuscripts unfold with wisdom of yoga in this path defining feature documentary. She further stated: “I think there is no such documentation in the world of this depth and vastness on the subject.”

Ramji Om made a power point presentation about his research on the Indian civilization after screening of the shorter version of ‘History of Yoga’ film. He mentioned that the interesting new insight was film’s philosophical links to the Harappa civilization dating back to more than 6,000 years. Archaeological findings from sites in Haryana district of India revealed the significant central role of women in this ancient civilization leading to a very systematic way of life without violence. He spoke about the central role of women connecting to Yoga discovery but said that it needs further study and findings. He also talked about the yogini cult of central India which  finds significant relation with yogic mysticism.

Omthen made comparisons of Indian philosophy with western philosophy and logic, and argued that it reveals the uniqueness of how Indian civilization’s roots were nurtured with the osmosis of dharma. He discussed the technique of yoga responsible for landmark achievements in the field of sciences, arts, architecture, and philosophy.

The film’s breathtaking photography of monuments and temple art is mesmerizing. Buddhism has been shown to influence yoga in its development. Jainism has its roots in early Vedic period. Yogic postures of Jain Tirthankars are beautifully depicted. The film aims to disseminate and popularize it amongst all continents where Yoga has become a household practice. The film ends in 19th century where modern science acknowledges the potential of yoga in a new light. Mr. Om concluded his speech saying, “ To understand the exact context in which yoga was developed and practiced, this film has the answer”

The film is a priced possession for Yoga lovers, researchers, educational Institutions and a gift item. Highly researched and well interpreted this documentary is a delight to watch, 6000 years in just 98 minutes!!

After a lively Q&A session, Yashawant Belsarey of Sewa International gave a vote of thanks. Earlier, light snacks were served to all participants.

As ongoing education for all faiths,OLLI Emory University agrees to show this outstanding documentary again at ‘Lunch & Learn Program’ on Sept 27th again free of charge.

Sikh-American teenager forced to remove turban at US airport: Report