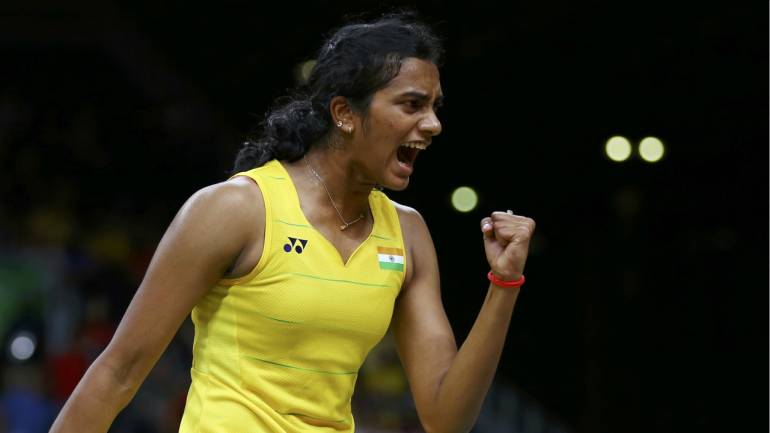 Basel (Switzerland), Aug 25 (IANS) P.V. Sindhu did not break down, but she had tears in her eyes when the national anthem was being played at St. Jakobshalle in Basel on Sunday. Moments after becoming the first Indian to win the BWF World Championships, a feat taller than her 5’10” frame, she could have let herself go. But she did not.

Sindhu quietly thanked her mother on her birthday, said she won it for the country which celebrate her along with Saina Nehwal as queens of badminton, and wore the gold medal with pride as her childhood mentor and national coach Pullela Gopichand watched from a distance.

There was a calmness about the stage, but never quite about the enormity of her feat.

After enduring a poor year given her lofty standards, Sindhu, like she always does, rose to the big stage and saved her best for the final act.

The 24-year-old crushed Japan’s Nozomi Okuhara 21-7, 21-7 in just 36 minutes in one of the most lopsided finals ever to add another feather to her glittering cap, which gave the sport in the country wings after Saina had set the wheels in motion.

Sindhu had come close to winning the World Championships on two occasions in the past two years.

In a pulsating final in 2017 that lasted nearly two hours and involved a 73-shot rally, Sindhu went down fighting to Okuhara, who became the first Japanese player to win a singles title at the World Championships.

Sindhu again reached the final in 2018, only to go down to Carolina Marín of Spain. She finally broke the jinx on Sunday in front of a strong Indian crowd, which cheered her vociferously.

Apart from the two silver medals Sindhu won in the last two editions, she had also won the bronze in 2013 and 2014. With five medals under her belt, Sindhu now has the most number of singles medals at the Worlds along with Zhang Ning of China, but what stands out is the time she took to collect these laurels. Sindhu has five medals from just six appearances in the tournament.

Right up there with Sunday’s win is Sindhu’s silver medal at the Rio Olympics in 2016, when she went down fighting against Carolina Marin after playing superb badminton right through the Games.

The Hyderabad girl also became the fifth woman player from India to win a medal in Olympics history and the first to bag a silver. At 21 then, Sindhu was the youngest Indian to win a medal at the Olympics.

Born in a family of volleyball players, Sindhu was drawn into the sport after Gopichand’s 2001 All England badminton championship triumph. Sindhu was 17 when she hogged international limelight after she stunned 2012 London Olympics gold medallist Chinese Li Xuerui in the China Masters.

In 2013, in her maiden appearance at the World Championships, Sindhu upset defending champion and reigning Olympic silver medallist Wang Yihan of China in the third round and went on to win the bronze.

She repeated her feat in 2014 and since then has dominated the World Championships like no other player.

Sindhu is also the player with the most number of wins (21) at the Worlds since her debut appearance in 2013 with Spain’s Marin coming a close second with 20 victories.

After Li Lingwei, Gong Ruina and Zhang Ning, Sindhu is now the fourth player to win a gold, silver and bronze in the women’s singles event at the Worlds.

To cap off what she has achieved so far, Sindhu is the only player to be a defending women’s singles medallist at the Olympics, Worlds, Asian Games and Commonwealth Games at the same time.

Besides her silver at Rio 2016, Sindhu grabbed a silver at the 2018 Asian Games before losing to Saina Nehwal in the final of the 2018 Commonwealth Games.

Man busted for backseat driving goes on another driverless cruise