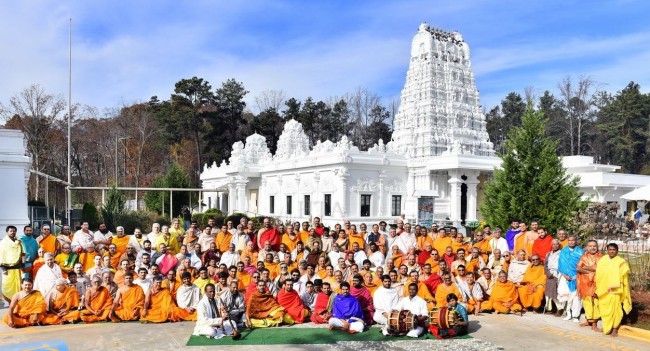 Atlanta, GA: Thousands of devotees gripped with devotional fervor thronged the Hindu Temple of Atlanta (HTA) in Riverdale, Georgia to attend and seek blessings at the historic, spiritually suffused Satha Chandi Sahita Ati Rudra Maha Yagna, (the ultimate siva Puja) over 11 days, from November 18 to 28, 2015.  The timing couldn’t have been better as it isTemple’s silver jubilee year, 25 years of being the focal point of the spiritual expression of the Indian community. 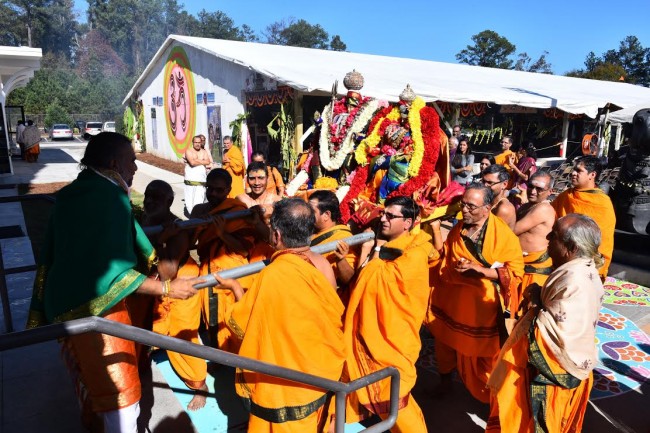 Dr.B. Krishna Mohan said, of the preparations for the big event: One hundred and twenty one learned Priests and Ritwiks fromIndia, the U.S.and Canada meticulously conducted the elaborate yagna and daily rituals.  To organize the Puja, committees were formed for food coordination, site preparation, decorations, religious ceremonies coordination, accommodation and transportation of the priests and ritwiks. Additional parking with shuttle service to two neighboring schools was arranged. For the convenience of the big number of devotees, a separate canopy next to theTemplewas erected for serving Theertha prasadam, lunches and dinners.  To promote the event,Atlantatemple conducted about 15 outreach Rudrabhishekams. In addition, two major cultural programs, Adi Sankara & Siva Leela helped promote and spread the word about this historic event. No effort was spared to make this a wonderful spiritual experience for all participants and devotees. This is undeniably a once-in-a-lifetime opportunity to participate in one of the holiest, ritually studded and most powerful Yajna in modern times. This Maha Yajna was performed for Loka Kalyana, the welfare of all devotees, their families, and for Universal Peace and Prosperity.”

Swami Adhyatmananda, who graced the event with his august presence, informed the writer that Sri Atirudra Mahayagna is a sacred and extremely powerful Vedic ritual. “In Rigveda, the glory of Siva is narrated in Astadhyayi.  If you repeat chapter five 11 times it becomes one Rudram.  Rudram is divided into Namakam and Chamakam. In Namakam, each stanza ends with namah or namo namah.  And each stanza of the Chamakam ends with cha me, meaning ‘for me’.  Eleven Rudrams makes one Maha Rudra.  And eleven Maha Rudras makes Ati Rudra.  Chanting or even listening to Namakam and Chamakam blesses the devotees.  Shat Chandi is explained as Durga Saptashati in Markandeya Purana.  It contains 700 verses in 13 chapters in praise of Mother Durga.  1350 stanza slokas will be chanted hundred times.  Rudra is Siva and Devi is Shakti.  Siva is cosmic energy.  Cosmic energy is working through the agency Durga.  There are two kinds of vidya: Apara (lower) andPara(higher).  Apara refers to the worldly knowledge.  Para is knowledge to realize the Absolute.  This Yagna is for bahujana hitaya, bahujana sukhaya (wellbeing and happiness of all).  It helps one to attain liberation.  It will promote Sanathan Dharma and teach the younger generations about our rich culture, and traditions.” In a letter expressing his prayers and good wishes, Swamiji also said, “the very recitation of Sri Rudram 14,641 times with oblation in Yajna Narayana with Satha Chandi is very unique and the most auspicious and rare amongst the rare.  Organizers deserve great admiration for their service to the community by organizing such supreme blessedness events. Without the grace of Almighty Lord Maha Rudra, Lord Shiva and Para Shakti Maha Bhagavati Durga, no one can think of such a divine Yajna prayer.” 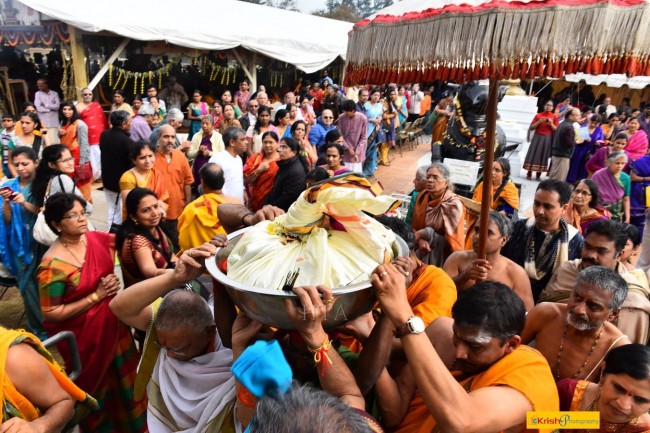 The dazzling idols in both theTemplesand yagasala under a canopy were resplendent in rich adornments.  Artistic, imaginative and lavishly decorated designs and garlands, with colorful fresh vegetables, flowers, grains and fruits inside theTemplesand Yagasala complemented and enhanced the festive atmosphere of the event. Through the eleven day Yagna, the elaborate rituals of different homams and pujas, and chanting of Vedic shlokas and mantras were meticulously conducted by learned priests clad in saffron robes seated at the Yagna kundas with consecrated fires, while the devotees sat either on the carpeted floor or chairs in the adjoining canopy and joined the priests in reverentially chanting mantras and shlokas. The chants magnified the uplifting spiritual vibrations. Vishnu Sahasranama Parayana and Lalitha Sahasranama Parayana had individual devotees performing the puja and kumkumarchana. 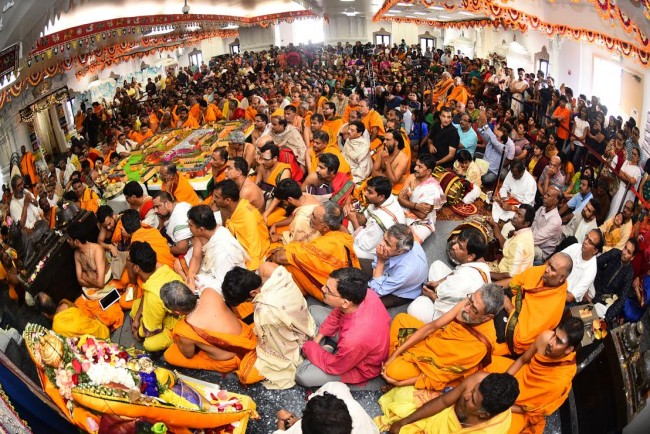 Saturday, November 28 was marked with joyous, enthusiastic participation and spiritual fervor by hundreds of devotees, guests and visitors for the grand culmination of the eleven-day celebration.  Mahapoornahuthi followed Sahasra Kalasabhishekam. The rituals also included Vasordhara Pradhana Kalasa Prokshana, Santhi Kalyanam, and Rajaseer Vadam. The Yagsala and Temples resounded with Om Namah Shivay and Har Har Mahadev. The priests carried the kalasas with coconuts on top, followed by deities carried in a palanquin covered with an ornate umbrella, framed and garlanded pictures of Adi Shankeracharya and Lord Siva to the ringing of bells, thavil and nadaswaram. The devotees showered flower petals as the swamijis entered theSivaTemple. It was a sight to behold! 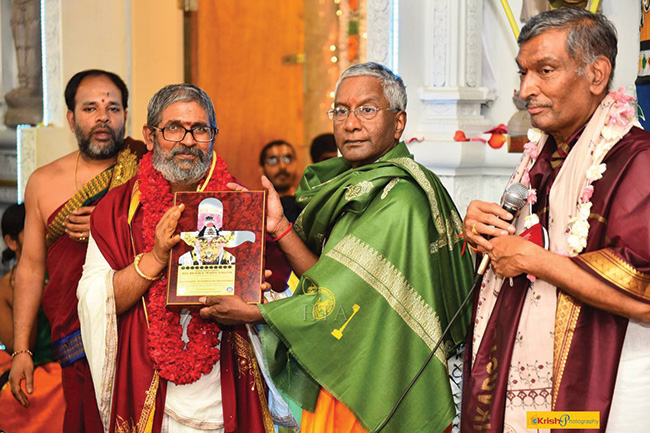 All the attendees were courteously served fresh, delicious Mahaprasadam and lunch at the end of the felicitations.

The successful Ati Rudra Maha Yagna of unprecedented scope and scale will continue to be a crowning glory for the Hindu Temple. 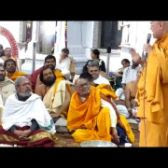