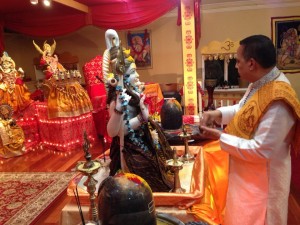 Atlanta GA: One of the vandals, a minor was nabbed by the police, while the mastermind of the crime  (who is not minor), remains at large, said Pandit Ravi Chowbey of the temple.
“The graffiti took very long to get out, but we worked hard to clean it last weekend,” he added.

The statue of Mahadev has been moved inside the temple, along with the lingam. The temple plans on rebuilding a more secure shivalaya that will house the lingam and possibly the statue, Chowbey said.

“Security cameras have been installed and we are going to hear from the US attorney this Sunday about ways that our mandir can remain safe,” he said.

Atlanta, GA: Early Saturday morning, August 2nd, the Vishwa Bhavan Mandir, a Hindu temple in Monroe Georgia, was vandalized, according to a press statement issued by the temple. The building was defaced with black spray paint, consisting of profanity and other damaging graffiti. The statue of Lord Shiva was desecrated with black spray paint. The Walton County Sheriff Department’s has started investigations into the matter, but so far the perpetrators remain at large.

The desecration of the Lord Shiva statue was heartbreaking for the Hindu community inGeorgia, because their biggest function of the year, a weeklong celebration of Lord Shiva, includes mass worship of the statue, said the statement.

The Vishwa Bhavan Mandir was built in 2008 and conducts service every Sunday morning and during special holidays for Hindu worship. The Mandir had just concluded a weeklong youth camp, last Sunday, July 27th, before the hate crime occurred.

The Vishwa Bhavan Mandir is very active in performing community service. After each Hindu holiday, the Mandir gathers its members to feed and clothe the homeless in the city ofAtlanta.

“The members of Vishwa Bhavan Mandir want to make it known that acts of vandalism should never be tolerated at any place of worship. Hindu Mandirs have been vandalized for centuries, but many Mandirs decide not to pursue any further action, after filing a police report,” said the statement. “Additionally, members of the Vishwa Bhavan Mandir want other places of worship, around the country, to be aware of what has happened, follow suit with the necessary precautions, and not wait for an act of vandalism to catalyze strict security.”

The temple is working with the state and federal government to ensure that incidents do not happen again.

Up Your Glamour Quotient This Party Season