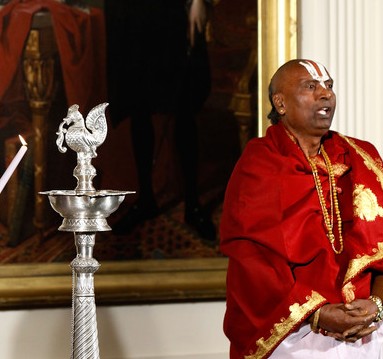 Washington, Jan 21 (IANS) A Hindu priest will be among various religious leaders who will offer prayers at Washington National Cathedral for Donald Trump on Saturday, a day after he was sworn in as the 45th US President, the media reported.

Narayanachar L. Dialakote from the Sri Siva Vishnu Temple in Lanham, Maryland, will offer prayers at the National Prayer Service, also to be attended by Indian American Jesse Singh, the chair of the Sikh Associations of Baltimore and Imam Mohammed Magid from the All Dulles Area Muslim Society Centre in Sterling, Virginia.

The service would also feature representatives of the Jewish, Baha’i, Navajo, Mormon, Greek Orthodox and many other faiths, reported the Washington Post.

Alveda King, who is a niece of the Rev. Martin Luther King Jr. and Cissie Graham Lynch, a granddaughter of evangelist Billy Graham, will also participate in the prayers.

Calls to prayer will be offered by Rev. Canon Rosemarie Duncan. The rabbi, three pastors and Sajid Tarar, a Muslim man from Baltimore who prayed for Trump onstage at the Republican National Convention, will read Biblical passages.

Others will read prayers for peace. The service will conclude with a prayer for the nation delivered by Donald Cardinal Wuerl, Archbishop of Washington, DC, and a dismissal by Rev. Darrell Scott. There will not be a sermon.