Atlanta, GA: “Our leaders see political and strategic convergence,” said India’s Ambassador to the US, Arun Kumar Singh, on the growing bilateral relations between India and the US. “Our economic partnership is growing.  Indo-US trade currently stands at $120 billion, but President Obama and PM Modi would like to take it to the level of $500 billion.”

“Indian investments in the US are growing. In the past five years, Indian companies have invested $ 15 billion in the US economy, and created close to 100,000 jobs here,” he said during  a luncheon discussion with Ambassador Charles Shapiro, president of World Affairs Council of Atlanta (WAC) on the topic, “The US and India: A critical 21st century global partnership”.

The discussion, hosted by WAC, was held at the Commerce Club downtown on February 24, and attended by a diverse audience of 200 that included, amongst others, members of Atlanta’s vibrant business community.

The WAC event was a highlight of the Ambassador’s two-day visit to Atlanta.

The discussion traversed topics like the growing India-US partnerships in trade, defense and technology, the opportunities for small and medium-sized companies to do business in India and the Modi government’s emphasis on start-ups and innovation.

He said, PM Modi’s September 2015 visit to Silicon Valley was to asses the potential in digital technology and renewable energy partnerships. “During his visit, PM Modi noticed that in some of the new technology areas like digital technology, Indian companies and Indian origin tech entrepreneurs and workers are an integral part of global investments in innovation.”

There is a lot of cost effective innovation and R&D happening in India, which provides an opportunity for a win-win partnership he added. As an example, he said Mangalyaan, India’s mission to Mars cost less than the production of a Hollywood movie.

Expanding on the topic of defense partnerships between the two countries, he said India had contracted over $14 billion in defense equipment from the US in the past five years, more than with any other country. “The two countries are moving away from a buyer-seller relationship to co-development of technology and co-production.”

He said, the two countries have identified six pathfinder projects under the Defense Trade and Technology Initiative (DTTI).

The Ambassador’s advice to Atlantans who want to do business in India, is to seize the moment, be the first responders, because “change is happening”. The government has been taking a series of steps since last year- with an eye on small and medium sized companies- to make it easier to do business in India, he said. “The number of approvals required has been reduced, processes have been simplified, and are now online.”

“Already, there is a huge presence of US companies in India,” he added. “General Motors, Ford, Qualcomm are among the many companies are doing additional investments in India. According to a survey, in the first six months of last year, more FDI was committed to India than any other country in the world.”

The diplomat talked about ‘Invest India’, a public, private joint partnership between the Indian government and Federation of Indian Chambers of Commerce and Industry (FICCI). “Their job is to handhold the investor with the aim of facilitating small and mid sized investments,” he said.

On the topic on innovation, the Ambassador said India is a young country with a median age of 29 and would remain a country with a working age population for the next half century, and hence, start-ups are a growing trend in the country.

Part of the reason for this upward trend is because of a shift in the mind-set of Indian families, which traditionally shunned failure, and where everybody was expected to succeed. Now, people are prepared for failure, he said.

“Young people don’t want to work for anybody. They want to be in R&D and enterprise. In the last two years, $6 billion has flowed into startups. This will be a huge area for partnerships.”

To a question on the rise in protests in India, including the recent one involving the Jat community’s protests against the quota system in Delhi, Ambassador Singh said he didn’t see a need to be worried about protests, demands or the response to protests in a large, complex democracy like India.

“India has an electorate of 830 million voters which is more than the US, European Union and Brazil combined. We have 22 national languages. We are like a United States of Europe. Several major world religions emerged fromIndia. All other major religions were welcomed inIndia. Because we are a democracy, people exercise their demands through public protests. This has happened since independence and in fact, we got our independence through non-violence protests.” 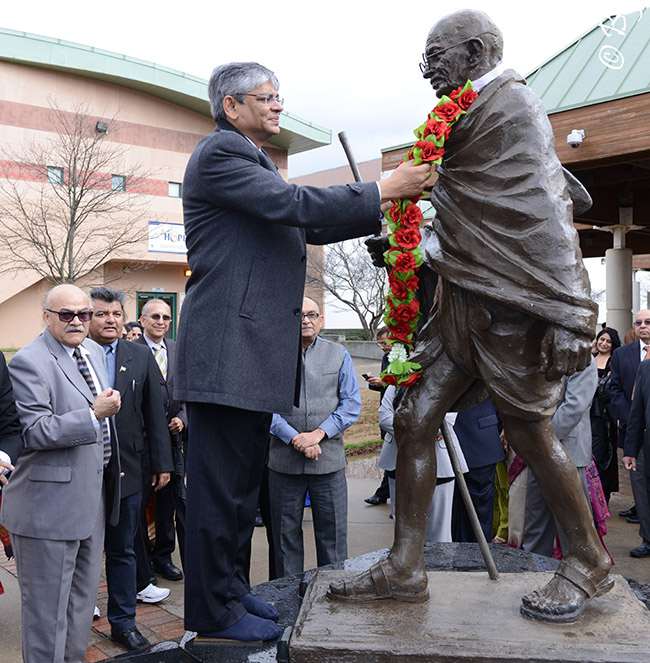 The WAC event was followed by a visit to the Gandhi statue at the Martin Luther King, Jr. National Historic Site organized by the Gandhi Foundation of USA.

The same evening, a well-attended banquet reception for the Ambassador was jointly hosted by the Indian Associations of Georgia. The reception was a great opportunity for Ambassador Singh to meet with representatives of the various organizations that service the Indian community of Georgia.

Speaking to NRI Pulse at the end of his two-day visit, Ambassador Singh said this was a visit he was eager to make because of the city’s importance from an economic standpoint, and from the standpoint of outreach to the Indian origin community in the region.

“This was a very productive visit,” he said. “I had the opportunity to meet Georgia Governor Nathan Deal. We spoke about trends in India-US relations, and discussed ways to consolidate it further.”

Ambassador Singh’s Atlanta visit was preceded by a two-day tour of Montgomery and Birmingham, Alabama. In Montgomery, he met with Governor Robert J. Bentley, addressed the Senate and was received by the Speaker of the Assembly. In Birmingham, he met with Mayor William Bell, visited the University of Alabama, which has a sizable Indian student population, and made a presentation in the Air War College on the topic of India’s role in world security.

“Thanks to the efforts made by the Consulate General of Atlanta and its partners, this has been a very productive trip,” he told NRI Pulse.