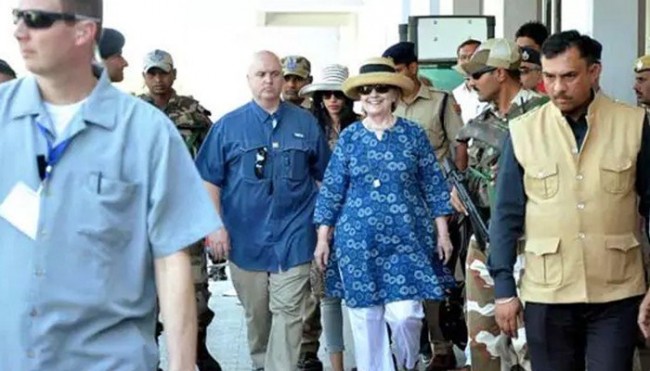 Jaipur, March 16 (IANS) Former US Secretary of State Hillary Clinton, who is on a visit to Rajasthan, has fractured her wrist after slipping in a bathtub at a resort in Jodhpur where she was staying, informed sources said on Friday.

She slipped in the bathtub at Umaid Bhavan Palace in Jodhpur on Wednesday.

Clinton had also sustained injuries during a visit to Madhya Pradesh’s Mandu earlier this week. She tripped twice while coming down the stairs of Jahaz Mahal.

The video of the incident went viral on the social media.

Suresh Goyal, CEO of Goyal Hospital in Jodhpur, said she was treated there for about 15-20 minutes. He refused to speak more on the matter.

However, the sources confirmed Clinton was rushed to the hospital around 5 a.m. on Wednesday after the fall and underwent an X-ray and a CT scan. A hairline fracture in her right wrist was diagnosed, hospital sources said.

After a plaster bandage, she was advised to go for another check-up in three days and allowed to travel further as her injury did not impact her travel ability.

She arrived in Jaipur on Thursday.

The sources said Clinton had complained of pain in her right hand ever since she arrived in Jodhpur on Tuesday and was treated for the same. She had cancelled a visit to the 15th-century Mehrangarh Fort because of it.