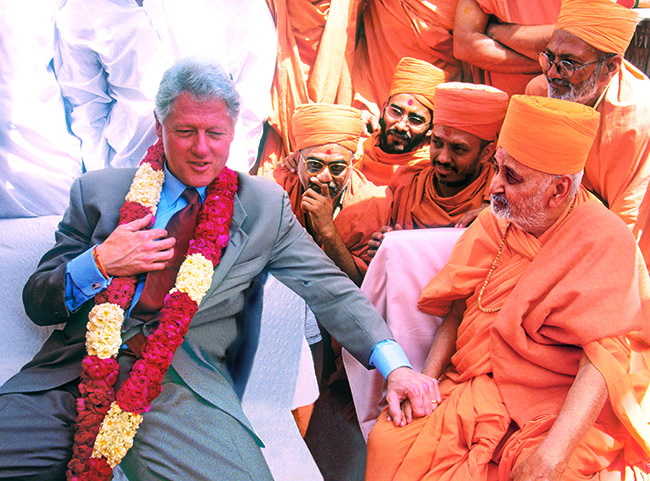 Atlanta, GA, August 20: Former Secretary of State Hillary Clinton and Former U.S. President Bill Clinton conveyed their sincerest condolences on the passing of His Holiness Pramukh Swami Maharaj. Secretary Clinton wrote, “Pramukh Swami’s deep sense of devotion led him to spend his life revitalizing communities in need…His example helped his followers find more harmony – both with others and within themselves. And we hope that humanity will build upon his legacy for generations to come.”

In her statement, Secretary Clinton specifically highlighted the core reason that millions around the world had called Pramukh Swami Maharaj their spiritual guru: “Pramukh Swami didn’t just teach virtues – he lived them every day.”

Secretary Clinton fondly recalled that President Bill Clinton was “fortunate enough to visit with his Holiness, both here in the United States and at the Akshardham Mandir in Gujarat.”  President Clinton first met Pramukh Swami Maharaj on October 4, 2000, beginning a unique friendship with the late Guru of the BAPS Swaminarayan Sanstha.  At this first meeting where President Clinton learned about BAPS’ humanitarian, spiritual, cultural, educational, environmental, and medical activities, the highlight remained a touching moment of spiritual connection when Pramukh Swami Maharaj presented a sanctified rosary to President Clinton and showed him how to chant the rosary in a traditional Hindu manner.

At the conclusion of this April 5, 2001, meeting, President Clinton remarked to Pramukh Swami Maharaj, “On meeting you I feel and believe that I am fortunate.  It is a great thing for me to be blessed by you here today.”

Just two days before the Secretary Clinton and President Clinton offered their condolences, millions of tearful devotees had gathered for the cremation rites of His Holiness Pramukh Swami Maharaj, one of India’s most commonly known Hindu ascetics revered by millions around the world. The fifth spiritual successor of Bhagwan Swaminarayan and spiritual leader of the BAPS Swaminarayan Sanstha departed his mortal body on Saturday, August 13, 2016, at the age of 95. Over 2.1 million devotees from around the world dashed to the village of Sarangpur in Gujarat, India, to pay their last respects before his final rites were performed on Wednesday, August 17, 2016. The atmosphere was filled with comforting friends and strangers sharing memories with each other of their uplifting interactions with Pramukh Swami Maharaj, reminiscing upon the heartfelt connection that cemented his influence and wisdom in their lives.

Prime Minister of India, Narendra Modi, visited Sarangpur, Gujarat from Delhi and addressed saddened devotees before the funeral rites saying, “His Holiness Pramukh Swami Maharaj was a stalwart among humans who embodied compassion and humility…Today you have lost a Guru, but I have lost a father.”

Secretary Clinton’s thoughts echoed the sentiments from heads of states in all parts of the world, including British Prime Minister Teresa May, Canadian Prime Minister Justin Trudeau, and HRH Prince of Wales. “His Holiness Pramukh Swami Maharaj exemplified the values of British Hindus whose contribution helps make the United Kingdom one of the world’s most successful multi-cultural, multi-faith democracies,” stated Teresa May.  Speaking of his life of service she added: “This legacy of selfless service will continue to benefit humanity for a long time to come.”

Many devotees had traveled overnight from the United States to attend the cremation. “Pramukh Swami Maharaj welcomed all people in search of guidance, spirituality, and self-improvement. He had a heart in which the whole world could live. Those who love him are all different, but the divinity they saw in him is the same,” said Puja Patel, 22, from Columbus, Ohio.

Most remembered as a pious, selfless person, Pramukh Swami Maharaj had dedicated his life towards the service and personal development of others, establishing mandirs (Hindu temples) to preserve spirituality for current and future generations, as well as developing and overseeing schools, hospitals, and disaster relief services to provide infrastructure and support across communities of all sizes.

Dr. Kashyap Patel, a cardiologist in Atlanta, Georgia, expressed his feelings following the passing, “I grew up building a bond with Pramukh Swami Maharaj. His travels from India would bring him to America…He would reassure [devotees] in their faith, talk with them about their struggles, challenge them to improve their poor habits, listen to their seemingly insignificant worries – sharing the burden of life’s emotions with all who would lean on him. As he aged…face-to-face meetings with him grew fewer for all devotees. During this time it became clear that his role as a guide, as a Guru, was not limited to his physical presence, it continues in the hearts of all those who accepted him as their teacher and friend.”

Born as Shantilal Patel on December 7, 1921, Pramukh Swami Maharaj, was initiated as a swami (Hindu monk) on January 10, 1940, and received the name Narayanswarupdas Swami. On May 21, 1950, he was appointed as Head of the organization and came to be known as Pramukh Swami Maharaj.  Ever since he became a swami, he has counseled seekers from all walks of life through comforting discussions, compassionate letters, early hour phone calls, and visits throughout Gujarat – home to home, hut to hut – often made entirely by foot. The sheer amount of time given selflessly in working with people, listening to their pains and miseries to provide solutions founded in unity and compromise, is the reason the entire Hindu community is experiencing an unparalleled sadness upon his passing.

Pramukh Swami Maharaj served individuals as a father, teacher, mentor, friend, advisor, and ally – he was a Guru who empowered people to live morally upright lives rooted in devotion that would transform their character, attitudes, and outcomes to provide greater happiness for both themselves and their families.

When the final rites were performed, thousands in Sarangpur were seated in prayer facing Pramukh Swami Maharaj’s funeral pyre, with hundreds of thousands watching through a live telecast streaming around the world.

When the flame ignited Pramukh Swami Maharaj’s body, beginning at his toe, the audience was collectively stilled and quieted. The mood on the mandir grounds was solemn and awash with the profound devotion of pained people as they watched the light of the pyre grow stronger, recalling their Guru. Heartfelt tears soaked millions of faces for whom this day was unimaginable, the day of the physical departure of their beloved Guru who has guided them through life’s peaks and valleys.

Chaitali Inamdar of Edison, New Jersey said, “Although I am deeply saddened by the news, I truly believe he will always be with us through his teachings. I lost a mentor but even in that loss, I have gained insight and wisdom in the reassurance that his message thrives in how I choose to live my life.”

Pramukh Swami Maharaj’s life and message of spirituality has left a lasting impression on the community of Hindus who will now work to carry his work and teachings forward under the guidance and leadership of His Holiness Mahant Swami Maharaj (Keshavjivandas Swami), the sixth spiritual successor of Bhagwan Swaminarayan and Guru of the BAPS Swaminarayan Sanstha.