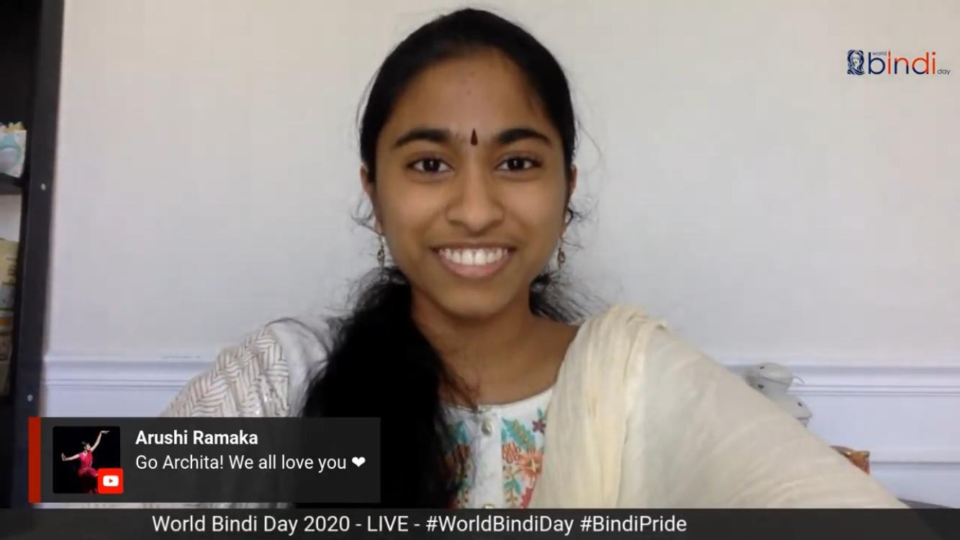 Atlanta, GA, October 22, 2020: A 16-year-old high school student launched the first-ever World Bindi Day on October 17, 2020. Archita Nemalikanti, founder of Mission Bindi, partnered with the Coalition of Hindus of North America (CoHNA) and Hindu Student Council (HSC), to organize a virtual event uniting Hindus worldwide to show their solidarity with the bindi, one of the most ancient Hindu symbols.

World Bindi Day is an opportunity to understand the glory of the Hindu tradition, embrace the deeper meaning of the bindi, and bring the bindi back into the mainstream. For over 5,000 years, the bindi (derived from the Sanskrit word बिन्दु “bindu”) and the tilak (derived from the Sanskrit word तिलक “tilaka”) have been used across Hindu civilization and have been the emblems of its rich philosophical ethos. Bindi also marks the location of Ajna Chakra (center of the forehead), which has deep significance in Hindu Dharma. The word “Bindu” dates back to the Rigveda, the oldest sacred text known to humankind.

“The bindi is not a dot but a 5,000 year old civilizational thought!” remarked noted writer and activist Shefali Vaidya in her keynote speech at the first inaugural World Bindi Day celebrations, the start of the Hindu festival of Navratri which honors the divine in feminine form.

“Murtis of Mother Earth right from Sindhu-Saraswati civilization to current times depict the bindi. Various facial features changed, but one thing always remained on was the bindi on the forehead,” said Vaidya. She explained that the bindi is gradually disappearing from the Indian mainstream. She also narrated episodes of struggle to retain the bindi. For example, the Portuguese tortured Hindus in Goa for wearing the bindi, but the Hindu community resisted and ultimately prevailed.

Preity Upala, a former investment banker turned thought leader and media entrepreneur, spoke about her background and relationship with the bindi starting from her childhood days and how she continued to wear a bindi in her international travels.

“The bindi is the embodiment of civilizational wisdom,” Upala asserted. “And it all manifests into a single point.” She urged Hindus not to shy away from bringing the bindi into the mainstream and make it more colorful and fashionable while retaining its connections to Hindu Dharma. “As long as it’s done with respect and reverence for the source, [. . .] it is a good thing for us and the world at large.”

“World Bindi Day brings out and celebrates aspects of Hindu culture which most Hindus were not comfortable with earlier,” said Nemalikanti. “The bindi is connecting me back to my roots and values. America prides itself on its diversity, and Hindus can be proud Americans while retaining our culture and identity.” Nemalikanti shared how the bindi is slowly fading away from daily use within the society. She explained that if the bindi is not retained and celebrated, it could end up in a museum for future generations.

HSC President Arnav Kejriwal and CoHNA Board Member Sohini Sircar also brought forth their perspectives of the diminishing bindi within Hindu Dharma and their experiences facing bullying and Hinduphobia for wearing the bindi.

“Hindu Students Council’s mission is to promote ideas coming from young Hindus and provide a platform for their thoughts and initiatives. World Bindi Day is a great example of an initiative that was the brainchild of a high school student; we are fully supporting this idea and where it takes off.” shared Kejriwal.

“We were onboard the day Mission Bindi shared this idea with us. CoHNA’s mission is to advocate for a better understanding of Hindu Dharma. Celebrating the bindi/tilak, one of the most prominent of Hindu symbols, is a perfect way to appreciate our rich history and culture,” added Sircar.

As the day came to an end, social media lit up with people from all backgrounds posting pictures wearing a bindi or tilak all over the world. Mission Bindi, HSC, and CoHNA have ignited a revival of the bindi/tilak through World Bindi Day and hope to bring the bindi forward as a steppingstone for broadening the discourse about Hindu Dharma.