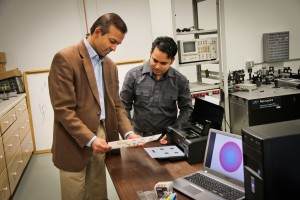 Washington, March 8 (IANS) Using an inexpensive Rs.3,600 inkjet printer, two Indian-origin electrical engineers at the University of Utah have for the first time produced microscopic structures that use light in metals to carry information.

This new technique, which controls electrical conductivity within such micro-structures, could be used to rapidly fabricate superfast components in electronic devices — making wireless technology faster or printing magnetic materials.

By crowding light into metal structures with dimensions far smaller than its wavelength, data can be transmitted at much higher frequencies such as terahertz frequencies.

“Very little well developed technology exists to create terahertz plasmonic devices, which have the potential to make wireless devices such as Bluetooth — which operates at 2.4 gigahertz frequency — 1,000 times faster than they are today,” explained Ajay Nahata, a professor of electrical and computer engineering and senior author.

“Because we can draw and print these structures exactly as we want them, our technique lets you make rapid changes to the plasmonic properties of the metal, without the million dollar instrumentation typically used to fabricate these structures,” Nahata added.

Depending on the relative amounts of silver and carbon ink used, the researchers could control the plasmonic array’s electrical conductivity or how efficient it was in carrying an electrical current.

Plasmonic arrays are currently made using micro-fabrication techniques that require expensive equipment and manufacture only one array at a time.

Until now, controlling conductivity in these arrays has proven extremely difficult for researchers.

Nahata and Gupta used terahertz imaging to measure the effect of printed plasmonic arrays on a beam of light.

When light with terahertz frequency is directed at a periodic array of holes in a metal layer, it can result in resonance — a fundamental property best illustrated by a champagne flute shattering when it encounters a musical tone of the right pitch.

According to Nahata, with this new printing technique, “We have an extra level of control over both the transmission of light and electrical conductivity in these devices”.

You can now design structures with as many different variations as the printer can produce, he added in a study that appeared in the journal Advanced Optical Materials.

These faster plasmonic arrays could prove useful for wireless devices and printing magnetic materials for greater functionality in different devices.