Of late a historic Gujarati play ‘Kasturba ‘directed by well-respected and highly accomplished theatre director and actor Aditi Desai is receiving rave reviews. The riveting play was first staged at Gujarat Vidyapith on February 22nd (Commemorating 69th death anniversary of Kasturba Gandhi). In less than a month, eleven shows have already been performed and more are being planned to meet with growing demand. The Play is in Gujarati but will soon be translated into Hindi and later into English. 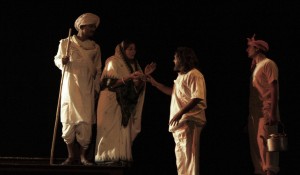 Kasturba Gandhi was born on April 11, 1869 in Saurashtra, Gujarat and passed away February 22nd, 1944 at the Aga Khan Palace, Poona, India. Her birth and death anniversaries came and went. There were no reports of central or state government officials or general public honoring her or eulogizing her or her immense silent role as Gandhi’s loving, devoted, supportive wife or her children’s caring, solicitous mother, a brave female freedom fighter, or a social reformer. It is a sad fact that our oral history and collective memory has steadily nut surely marginalized Kasturba and no one has truly questioned that. Even our documented history has not adequately evaluated her role. In no book ha she emerged as a heroine. She never sought limelight nor special favors or privileges as Gandhi’s wife. She played her diverse roles with a quiet dignity and grace, always remaining in the background as Gandhi’s shadow, in silence. And that is where our historians and society at large have chosen to relegate her. Ahmedabad based Aditi Desai, daughter of prominent thespian Jashwant Thaker ,who is an actress,director,playwright,filmmaker.humanist,social activist and Executive Director of Jashwant Thaker Memorial Foundation, decided on a play about Kasturba highlighting some of the momentous ,or pivotal moments in her life.

Trained by her father since the early age of thirteen, Aditiben has performed in Greek, Sanskrit and Gujarati plays and is well versed in classical theatre.She considers herself a ‘cultural feminist’ and uses theatre and visual arts as a powerful medium to highlight the problems of the downtrodden and neglected tribals and to empower them and promote peace and gender equality. To achieve this, she started street theatre and also held workshops to train tribals and even prisoners in theatre art. The play ‘Kasturba ‘has been co-produced by GANDHI THEATRE OF Gujarat Vidyapith and Jashwant Thaker Memorial Foundation and directed by Aditi Desai who  faced several challenges:

(1) 88 year old Narayanbhai Desai, a Gandhian and a prolific author, who visited Atlanta, with his daughter Sanghamitra in March, last year, was tied up in reciting his highly popular Gandhi Katha. And he was inexperienced in writing a play’s script. Obliging as he is, he however consented and slowly and steadily completed the assignment.(With the help of noted authors and theatre-acquainted Dhiruben Patel and Naushilbhai Mehta, A WELL KNOWN  theatre director, Writer-MUMBAI).

2 Lack of funds in Jashwant Thaker Memorial Foundation’s Bank Account. She had to work on a shoestring budget.

Slowly the formidable challenges were met and wrinkles ironed out as below:

“I was looking for actors with Gandhi spirit and was not concerned about their similarity in looks” says Aditi Desai. There were 75 characters and various locals in the script. It is a period play. We downsized the cast to 45 and decided that except for the main characters, others will play two or three characters. We conducted a month long readings and charkha and rantia-spinning-wheel training for Abhinay and Kalpana.”

She was mainly searching for actors to play three important roles-that of Gandhi, Kasturba and Harilal’

Role of Gandhi-Abhinay Banker- He is a well-known young actor, director, has worked in many plays and films. He is also casting director for many films.

Kalpana Gagdekar as Kastur-She has chosen 33 year old Kalpana from Chhara tribe to play the role. Kalpana has acted in over 40 plays and in about ten films.

Hemang Dave as Harilal. He is a promising actor, singer, and working with various directors.

Aditi Desai’s daughter Devaki has been cast as Sutradhar.Devaki is a popular face with youth. She works as a radio jockey for Red F.and as a programming head for Gujarat. She is a talented actress and a third generation of Jashwant Thaker family.

Most difficult scenes in the Play were vow of celibacy; conflict between Harilal and his father Gandhi; Harilal’s meeting with Gandhi and Kasturba at the Katni railway station, Ba’s death, and showing changes in ages and personalities of Bapu, Ba, Harilal and rest of the cast. Repeated rehearsals bonded the performers together like a family.

The locations are South Africa and India, so furniture, utensils, costumes, make-up etc.to reflect the locations and period had to be taken of.

Editing of songs was a big challenge. Songs sung in Gandhi Katha were abbreviated to two or three lines in order to enhance the effect and keep up the smooth rhythm of the play.

Collaboration with Go Bananas-Event Management Company and liaison with the media to garner publicity for the play.

The play which honors the legacy of a great Indian mother-figure touches the hearts and minds of the audience. It succeeds in bringing alive the shining life of spirited but self-effacing Kasturba. She was a rare soul, a courageous freedom fighter and social reformer every Indian can be proud of.

Aditi Desai effusively comments,” The series of shows with ‘HOUSEFUL’ signs on Ticket windows is a testimony to the immense popularity of the play. The play has received standing ovations. Even males in the audience have been seen with tears in their eyes after watching some of the heart-tugging scenes .The play is travelling to villages in interior Gujarat. It has received support from Gandhian institutions, corporate world, eminent social activists, and Cultural groups, Mayors, Chamber of Commerce and Shrimati Vimalaben Lalbhai Kasturba Foundation Trust for shows. I have taken a vow to stage 108 Shows of this play”

Aditiben is keen to bring the play to Atlanta and other parts of US. The writer is confident Atlanta community will give it a rousing welcome.

Kasturba is the symbol of those hundreds of thousands of unknown women freedom fighters whose sacrifices have not been adequately understood, appreciated and evaluated and whose role will be lost, sooner rather than later. A play will be a befitting celebration to keep alive the memory of those faceless, nameless women and bring Kasturba’s contributions to collective memory as she was the Ba (mother) to India’s millions.

Love of yoga fuels a $27 bn industry across America