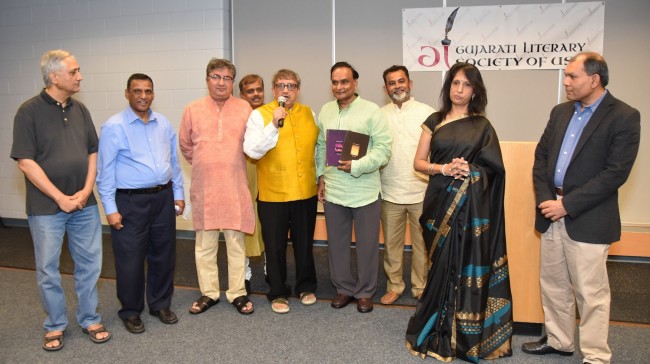 During social hour, Marco’s hot pizza and cold drinks were enjoyed by the literature loving community of Atlanta.

On behalf of Gujarati Literary Society of USA Shri Nimishbhai Sevak welcomed everyone and explained the need and objective of this new organization. Dr. Dhaval Shah who runs http://layastaro. com introduced Kajal as a superstar of Gujarati literature. Elaborating on it Dr. Shah said Kajal Oza Vaidya has worked on all forms of writing with remarkable ease,  be it novels, TV serials or film scripts!

Dr. Prakash Desai, a noted pediatrician of Atlanta, introduced Shobhit Desai as a close friend for the past 24 years! He hailed Shobhit Desai’s understanding of Urdu poetry, and Ghalib in particular.

Kajal talked about her literary journey: from a decision not to write to almost 56 volumes of her works! Talking about some of her famous works for about an hour, she gave glimpses of what made her to write.  She gave a very rare and vivid explanation about her writing to all her readers!

Shobhit Desai started his speech with the recitation of three of his poems and then jumped into the lighter side of literature. Along with his commitment to poetry, he felt compelled to talk about famous Gujarati humorist late Jyotindra Dave. Narrating some incidents of Jyotindrabhi’s life, he made the audience laugh their hearts out!

The cultural ambassador of Atlanta Mustafa Ajmeri thanked all literature loving people who were present, speakers and volunteers of the event. The Gujarati Literary Society of USA consists of Chirag Thakkar, Jatin Shah, Nimesh Sevak, Mustafa Ajmeri and Sanjay Pandya.