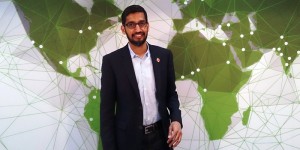 He said the American multinational technology company was working towards including as many people as possible in the use of internet in India, and added the company will develop products in India that have global usage.

“In our attempt to provide internet access to people, we have decided to provide Wi-Fi at 400 railway stations in association with RailTel. The first 100 stations will come online by 2016-end. Mumbai Central station will be online by early January,” Pichai said at ‘Google for India’ event here.

Later in the day, Pichai met union Communications Minister Ravi Shankar Prasad, who said Google has reached in-principle agreement with the Indian government for its research and development project, Loon.

The project is aimed at providing internet connectivity in rural India.

“I have proposed Google to partner with the state-owned telecommunications company Bharat Sanchar Nigam Limited for the pilot project,” Prasad said.

Pichai’s announcements were part of the assurance Google held out to Prime Minister Narendra Modi during his visit to the search engine giant’s headquarters at Mountain View, Santa Clara county, California, in September.

Regarding the company’s expansion plans in India, Pichai said: “We will ramp up our engineering investments at our Bangalore and Hyderabad facilities. We will also build a huge new campus in Hyderabad.”

He did not disclose the investment proposed by the company, which now has 1,500 employees in India.

“It makes a lot of sense to invest in India as what we build here will have global usage,” Pichai said.

“This country has given me and Google so much. I just hope we can give much more to the country,” Pichai said, adding, “a lot of what today is about is how we build products for the next billion Indian users, yet to come online.”

This is Chennai-born Pichai’s first visit to India after he became the CEO of the restructured Google in August.

The company is begining training programmes for two million new Android developers over the next three years that will make it easier for Indian developers to build solutions to local problems.

The online search giant is also partnering with the National Skill Development Council for this.

Pichai on Wednesday laid out Google’s three-step approach to promoting the Internet in India.

First, Google aims to give people in India and other developing countries better access to full internet through better connectivity and high-quality software. Second, Google is making Google products work better for Indians. And Google wants to make it easier for Indians to build on top of Google’s global platforms like Android and Chrome to build solutions to local problems.

He also pointed out how women are lagging behind in Internet use in India and underlined that it is important that sizeable number of women should have access to Internet.

“Google has been on a long journey in India to build products that connect more people, regardless of cost, connectivity, language, gender, or location,” Rajan Anandan, vice president of Google in India and Southeast Asia, said.