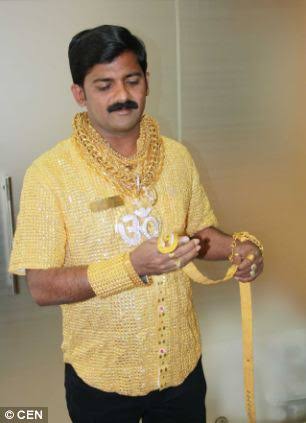 The high-profile businessman’s vehicle was accosted by some unknown persons on the outskirts of the city late on Thursday night.

They reportedly dragged him out, attacked him with a sickle and then pounded him to death with huge stones before fleeing from the spot.

Phuge usually moved around with armed private bodyguards, but it is not clear where they were at the time of the incident.

Officials later came across a much-mangled head and body of the 35-year old ‘gold man’, whose wife is Seema is an ex-municipal corporator.

The motive behind the killing is not known, but police preliminary suspect it may be linked to some business rivalries and are investigating all angles.

The police have recovered the sickle used in the crime and have sent Phuge’s body for an autopsy.

In late 2012, Phuge shot into global limelight after he stitched an opulent Rs 10 million (Rs one crore) 22-carat pure gold shirt which came decorated with six glittering Swarovski crystal buttons and an accompanying flashy gold belt in a matching design.

Besides his primary business of lending money, he ran the Vakratund Chit Fund Pvt. Ltd. along with his wife and there were complaints of financial misappropriation against him in recent times.

The Pune Police have launched a manhunt to nab the assailants, roadblocks erected at all exit points and within the city limits as well as district boundaries.

At that time (2012), his shirt was billed as ‘most expensive’ in the world, weighing around 3.5 kg pure gold and ‘stitched’ by the famous Ranka Jewellers of Pune.

The “golden shirt’ has over 14,000 gold flowers intertwined with 100,000-plus spangles sewn on a base of fine velvet, is described as easy and comfortable to wear like any normal clothes.