Presented by Ramzan Virani, the owner of Atlanta Event Hall, and other sponsors, the Shakila Ahmed concert received a very warm welcome to a packed audience of ghazal lovers. Shakila was backed by professional musicians such as Sandeep Savla on the harmonium and Amjad Ali Kawa on the tabla.

Shakila, born in Dhaka (Bangladesh), started singing in concerts and radio programs at the very young age of five. She has been a pupil of the famous Ustaads Gulam Ambia, Sanjeev Dey, Ustad Mohammad and Dilshad Khan.

Her versatile singing in classical, light and pop and that too in several languages like Urdu, Punjabi and Bangla added a new dimension to her singing. 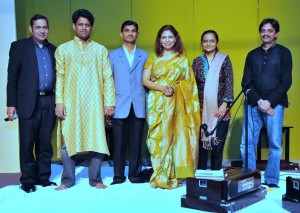 Virani, who has successfully organized other sold-out shows such as Munni Begum concert last January, was happy with the turn out. He has more upcoming events including the King of Comedy Poetry Dr. Kumar Vishwas on May 12 and a full scale Fashion/Bridal show on May 19.

TV ASIA was onsite to provide media coverage and interviewed co-organizer Ashok Goyal. “Shakila’s voice mesmerized the audience so much that they kept requesting songs from her to the wee hours of the morning…We are very pleased to bring her to Atlanta,” he said.

The show was videotaped courtesy of DJ Zee Hassan who will release selected ghazals on his facebook.com/DesiWebShow

Virani agreed to bring Shakila Ahmed back again this year for those who missed the show! His Atlanta Event Hall, with a capacity from 50-700 is available to anyone for their private or community functions.