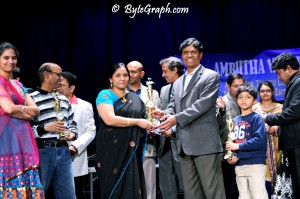 Atlanta, GA: Amrutha Varshini celebrated its annual event on Saturday, March 2nd at Berkmar High school. The festivities started at 4 pm and continued till late into the night. The highlight of the Annual event was a highly creative and fun-filled “Anthyakshari” event coordinated by Venkat chennubhotla, Phani Dokka, Madhav Durbha, Hari Pothukuchi and Sneha Chaturvedula. Audience enjoyed a keenly contested competition that ran into more than 20 rounds. AV members and children entertained the audience with classic film songs, rich in melody. After the grueling finals which saw the fortunes fluctuate for many teams,  the winners were announced with great fanfare.  The winning list: 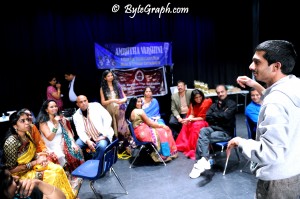 To organize and conduct cultural events on such a grand scale with free admission, AV received financial and organizational support from stellar organizations  and individuals. The grand sponsor was North American Telugu Association (NATA), platinum sponsor was Kiran Pashyam, and gold sponsors were TANA and Anand Garlapati.

Grand Sponsor NATA is committed to Telugu literature &culture and community service and has always extended help to any event that promotes these objectives. In a brief ceremony that was held to recognize the grand sponsors, NATA leaders Dr. Sanjeeva Reddy , Bala Indurti and other leaders  took to the stage and warmly greeted the audience. The leaders shared their vision for the highly anticipated and prestigious NATA 2014 convention to be held in Atlanta on July 4-6 2014.

Bala Indurti opined that the benchmark for NATA 2014 should be to imbibe all the good qualities of past conventions and to set the bar higher for excellence. The need of the hour is to have a positive view and focus the inward eye on fulfilling the noble goals and objectives of NATA that include promoting telugu culture, championing the telugu cause and the NATA spirit of community service from the heart. The fickle flame of glory for self will translate into a mammoth energy of success when the team sets the common ambition of realizing the dreams of NATA leaders and philanthropists Dr Prem Reddy and Dr Malla Reddy.

Melodious songs, Keen Anthyakshari competition, inspirational speeches from leaders combined with  sumptuous food from Hot Breads and pleasant camaraderie all around  combined to make this a memorable night for Telugu culture patrons of Atlanta.