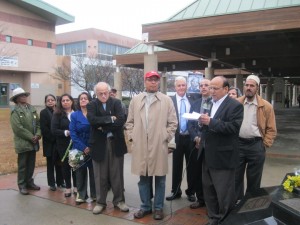 Atlanta, GA: On a Saturday 14 December, 2013 the Gandhi Foundation USA (GFUSA) hosted a magnificent community memorial service for Nelson “Madiba” Mandela at the pilgrimage site of the historic Gandhi Statue located on the grounds of the Martin Luther King Jr. National Historic Site.

The globally-respected peace legacies of three great leaders were beautifully united in Atlanta. It was an auspicious and blessed day for civic, government and business leaders (local-global) to gather and figuratively bend-low for humbly engaging in pranāma; of honoring their beloved peace teachers- Mohandas, Martin and Madiba. 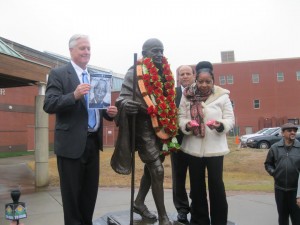 GFUSA leaders Subash Razdan, Antony Thaliath and Mohsin Bharmal stayed very busy welcoming all the guests as they arrived, and everyone’s eyes and hearts seemed to be wide open as the spiritual purpose of the historical ceremony unfolded. Of primary focus was the upcoming memorial program for Nelson Mandela (1918-2013), the internationally respected 1990-recipient of the Republic of India’s highest civilian award- the Bharat Ratna (or ‘Jewel of India’) and also the 1993 Nobel Peace Prize laureate.

Antony Thaliath, Exe Director of GFUSA extended a warm welcome to all the guests reminding all present (at this historic site visited by approximately a million tourists annually) that “Nelson Mandela through his life long fight against apartheid created a non-racial democracy in the oppressed S. Africa thus serving as a beacon of hope and guidance ….”. He then invited the chair of the GFUSA Subash Razdan to bring his remarks. 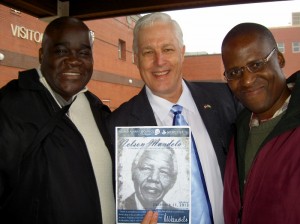 Bruce and Joseph of S. Africa with John Naugle.

Razdan stated that “GFUSA this year has been very active hosting a myriad of tributes and homage and other activities including hosting Gandhian Anna Hazare , Yoga Guru Baba Ramdev, spiritual leader Swami Adhyatmananda, Congresswoman Tulsi Gabbard (Hawai), ringing the bell of the 50th anniversary of Dr. King’s speech, et al.”  Razdan added, “it is very befitting that today we celebrate the legacy and life of Nelson Mandela, aka as Mandiba by his clan name, at the hollowed grounds of Dr. King (and Gandhi Ji) maintained by and in partnership with the National Park Service (NPS) and hope his fight for freedom peace and forgiveness in S. Africa lives on to serve the global humanity.”

Everyone attending was invited to join in together to offer their individual and collective tributes for celebrating Mandela’s great life and legacy. Within the minds of excited visitors was the Mandela’s powerful quote which ‘sang’ to all: “It always seems impossible until it’s done.”

Held in deep respect by hundreds-of-millions worldwide, and especially within South Africa, Nelson Mandela is often referred to by his Xhosa clan name “Madiba” and he is often described as “the father of the nation”. In the same dynamic peaceful manner of his predecessors, Gandhi and Dr. King… Mandela actually transformed an entire country and his great civic-service contribution resulted in inspiring many, many nations of the world.

The Mandela Memorial service was graced by Hon. Rajinder Singh, Acting Consul General of India in Atlanta. Hon. Singh, who has served as a diplomat in Zambia, Africa, inspired the audience with powerful reflections and appreciations for the Bharat Ratna Mandela on behalf of the Government of India-a message from the prime Minister of India Dr. Manmohan Singh, and he did so at Gandhi’s beautiful statue. He and other special guests were invited to place flower-garlands on Gandhi’s statue in advance of memorializing Mandela, an internationally loved and iconic leader.

Following the opening remarks of Hon. Rajinder Singh, Razdan introduced special guest, John R. Naugle from the “Atlanta: City of Peace” organization. Naugle expressed his deep gratitude to the Gandhi Foundation USA for their significant community service to propel the legacies of Gandhi & King, and for the powerful grounding in the peace movement that he had personally received as a former GF-USA Board Member. Additionally he stated: “Nelson ‘Madiba’ Mandela has greatly nourished and elevated the health of our global family and he is our great brother, just like Mohandas and Martin. May we all continually find ways to honor and support their globally-respected peace legacies in every upcoming year of the future that lays before us!”

Terry L. Hester, Founder of the international ‘Unity in the Community’ campaigns, was the next Special Guest speaker. Ms. Hester boldly proclaimed: “Nelson Mandela powerfully transitioned from 27 years of harsh imprisonment into a globally respected and transformed-life. Madiba opened the door for all of us to be here today, for if he had not risen up like Gandhi & King, then we would not be standing here in his honor. We accept the great torch-of-hope that Mandela has passed to us today… and we are certain it will help us all run further in our quest for global peace. His torch will allow the light-of-love to shine upon all of us when we experience the disease of hate. Nelson Mandela refused to allow his years of unjust and painful experience make him a bitter man. He allowed it make him a better man!”

Gregory G. Pridgeon, former Council Member and Chief of Staff for Atlanta Mayor Shirley Franklin and Vice Chair of GF-USA Board, was the next special guest invited to speak. He shared with the audience the experiences he had when he saw the City of Atlanta rally its international Corporations to divest from South Africa to propel an abolishment of its oppressive apartheid regime and spoke of his memory of Nelson Mandela being personally invited to Atlanta by former Mayor Maynard Jackson and Coretta Scott King to speak at Morehouse College (Dr. King’s alma mater). On June 27th, 1990 Mandela was recipient of an Honorary Doctor Humane Letters Degree.

M. Mohsin Bharmal, GFUSA Treasurer and a bridge builder provided the Vote of Thanks on behalf of GFUSA. Bharmal captivated the audience with the select memorial words honoring Mandela. It is important to recall that Mandela once proclaimed, “We believe Muslims in South Africa have the greatest freedom to practice their religion in comparison to any other country in the world.”  He thanked all for their presence and especially Officer Mari Hayden of the National Park Services and King Center, Sanjay Pandya of Davis Printing, TV Asia and Swapna Restaurant for the catering of the delicious snacks.

Special surprise international guests were Bruce M. Chilumuna, from Zambia and Joseph Chifamba, from Johannesburg, South Africa. Both made compelling statements as they were interviewed by the media. GFUSA also celebrated the many other supporters and virtual-attendees of the Mandela Memorial who could not attend physically, but were still with us in spirit. Of particular mention was the late founding Exe Director Giriraj Rao. He and many others were each certainly present ‘in spirit’.

The media attending the event was TV-Asia, Namaste Bombay TV, India Tribune et al. Their coverage was much appreciated. Anjali Chhabria, with TV-Asia, did on-camera interviews with dignitaries and special guests. Also present was “the always amenable” and widely respected Mustafa Ajmeri who handles public relations for the India Tribune in metro-Atlanta.

A oneness of purpose was celebrated and felt by all of the GF-USA dignitaries, special guests, international guests, plus civic, government and business leaders while memorializing Mandela and honoring the memories of Gandhi and King. In summary, the memorial was a wonderful success and everyone departed with their hearts and minds filled with inspiration to continue in their lives of service in deep appreciation for great peace leaders like Gandhi, King and Mandela.